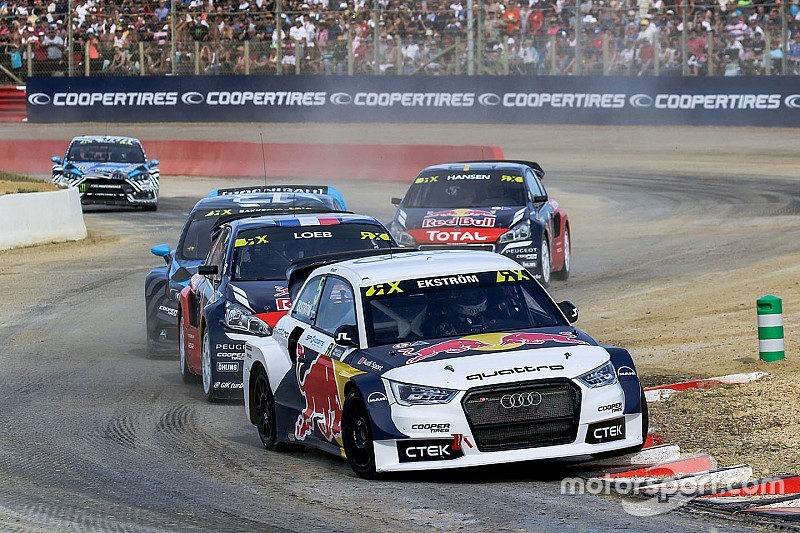 World Rallycross title contender Mattias Ekstrom set a pair of fastest times in the opening two qualifying sessions of the weekend at Loheac in France to top the order at the end of day one.

Bakkerud was third fastest in Q1, before pulling a last corner move on French hero Sebastien Loeb in the race that Ekstrom won in Q2 to be second fastest, elevating him to second overall.

Having won the last race of Q1 against rival Petter Solberg to set the second fastest time overall to Ekstrom, Loeb ran second to Ekstrom for much of the Q2 race but on the exit of his final lap joker he ran wide into the penultimate corner, allowing both Bakkerud and team mate Timmy Hansen through on the inside.

Loeb is third at the end of day one on the first circuit of the season at which he has prior experience, while Hansen is fourth overall.

The Swede fought for the lead of the last race in Q2 with Ekstrom, but came off worst in a door-to-door battle into the Loheac circuit’s hairpin, dropping down the order.

The double World RX champion raced Heikkinen in Q2 and ran third on the opening lap after being on the outside of a good move by Heikkinen into the second corner.

Solberg dropped behind Davy Jeanney in the process and was 10th fastest in the penultimate race of the day.

Winner of the Argentinian round of World RX in 2015, Robin Larsson, also beat Solberg in Q2 and is just one place behind the Norwegian in eighth overall on a track that doesn’t traditionally suit his sideways driving style, while Jenneay is ninth and Volkswagen RX Sweden driver Johan Kristoffersson completes the top ten.

Just days after announcing his imminent departure from the All-Inkl.com Munnich Motorsport team, Reinis Nitiss had a strong opening day in France with the squad and won his Q2 race on track to be inside the semi-final positions in 11th.

European Rallycross Championship leader Kevin Hansen was hit by gear selection problems in Q1 with his Peugeot 208, but struck back in Q2 with third fastest time to lift him into the top 12.

Yann Le-Jossec impressed on his debut for the OMSE squad deputising for the absent Kevin Eriksson and is 13th of the 31-car field.

It was a difficult opening day for the World RX Team Austria outfit. First Janis Baumanis retired from Q1 with a broken steering arm, before Timur Timerzyanov, who had been second fastest in practice, hit the wall backwards before turn two following contact with Le-Jossec causing significant damage to the Russian’s Ford Fiesta. He didn’t reappear for Q2 and is out of the event.

Frenchman Guerlain Chicherit failed to start either Q1 or Q2 with an undiagnosable technical problem with his JRM Racing Mini.