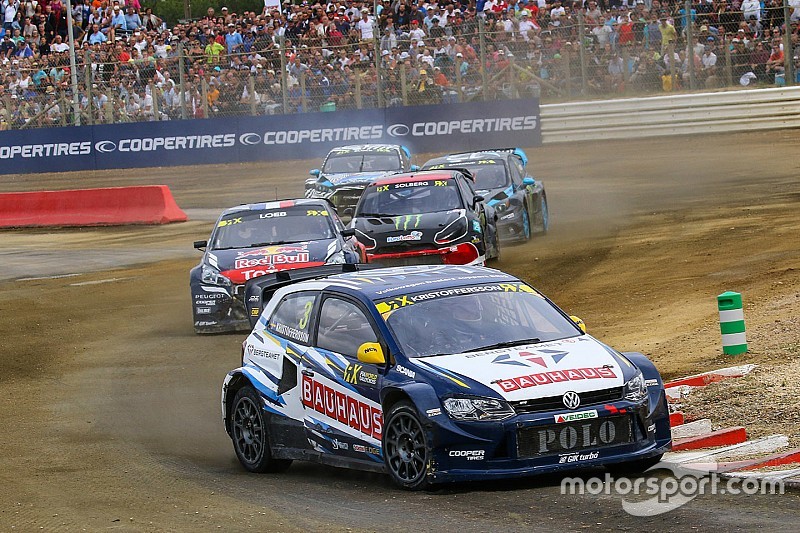 Kristoffersson led the final of the French round from lights-to-flag, taking his compulsory joker on fifth lap and maintained his advantage to cross the finish line almost three and a half seconds ahead of Andreas Bakkerud.

Former Swedish Touring Car Champion Kristoffersson wasn’t beaten on track once through Sunday, the Swede winning Q3, Q4 the second semi-final and then the final.

Bakkerud joined Kristoffersson on the front row for the final having won the first semi-final ahead of Petter Solberg, the latter climbing to second in his penultimate race of the weekend when title-rival Mattias Ekstrom slowed on the penultimate corner of the race with a puncture.

He was passed by both Solberg and Reinis Nitiss and didn’t make the final.

At the start of the final, Solberg initially moved ahead of Bakkerud at the first corner, but Bakkerud drew back alongside in his Ford Focus RS RX on the run out of turn two, the pair banging doors into the circuit’s hairpin.

The contact allowed home hero Sebastien Loeb to sneak through on the inside into second, having started on the second row of the grid with Solberg, and set about perusing Kristoffersson.

Bakkerud and Solberg continued to fight into lap two, Bakkerud retaking the position before reigning champion Solberg elected to remove himself from the traffic by immediately taking his joker.

Bakkerud quickly closed in on Loeb ahead and tried to pass the French star into the hairpin on lap three, the pair both taking their joker lap side-by-side, Loeb running wide on the extra-route entry and losing the position.

Bakkerud’s teammate Ken Block moved up to second position having not taking his joker and followed leader Kristoffersson into the alternative route on lap five.

While Kristoffersson returned to the lead, Block dropped back, the American’s race ending in a barrier on the final tour after contact with Nitiss, who celebrated his last race with the All-Inkl.com Munnich Motorsport team with fifth place.

Also the hairpin on the final lap, just ahead of the Block and Nitiss contact, Loeb passed Solberg for third and hung on to score an empathic home podium behind Kristoffersson and Bakkerud.