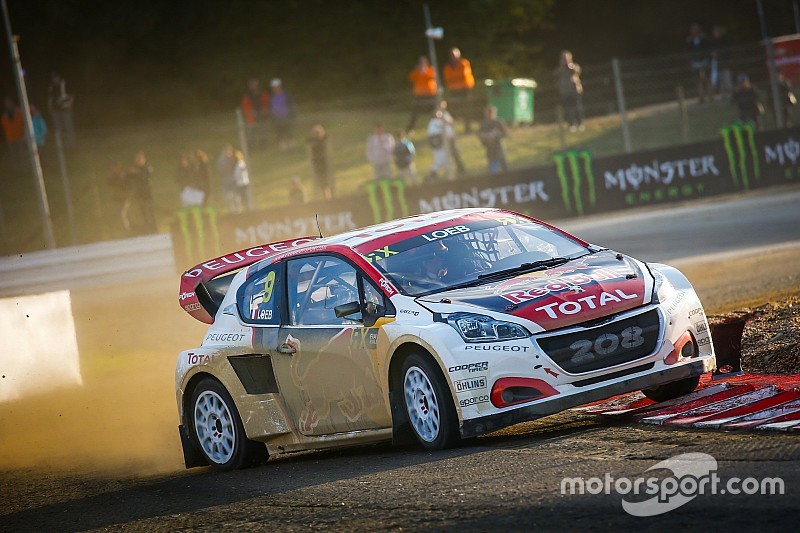 Rally legend Sebastien Loeb leads his home round of the World Rallycross Championship at the end of day one, tied on qualifying points with series leader Johan Kristoffersson.

The pair each notched up a fastest time in the opening two qualifying sessions of the Loheac event, Kristoffersson stopping the clock first in Q1 having fended off Loeb's team-mate Timmy Hansen in his race, while Loeb visibly dropped time behind Mattias Ekstrom in another encounter and ended up second overall by less than two hundredths of a second.

For Q2, the fastest five drivers started in the final race and it was Kristoffersson who made a poorer start than those alongside and tucked in behind Loeb and Ekstrom at Turn 1, as Petter Solberg and Hansen ran wide.

Kristoffersson took his joker at the first opportunity to duck out of the traffic, followed by his PSRX Volkswagen Sweden colleague, but when Loeb took his compulsory extra-route on the final tour, the Frenchman maintained his advantage by a clear margin and set a time almost 1.4 seconds faster than Kristoffersson's best in Q1.

Ken Block was fourth fastest in the morning's free practice session but lost track position in Q1 in a robust move by Solberg at the penultimate corner, but Block was still sixth fastest.

A race-win against his Hoonigan Racing Division team mate Andreas Bakkerud in Q2 netted the American the first-fastest third time.

The result lifted him to third overall in the intermediate classification, despite a heart-in-mouth moment for the Anglo-American team when Bakkerud exited the joker just behind his boss, but made a significant effort to avoid the rear of his colleague's Ford Focus.

Reigning champion Ekstrom is fourth overall, the Swede having lost track position to Loeb after the joker laps in Q1 and then slotted his Audi S1 into a tight gap between Volkswagen duo Kristoffersson and Solberg at the joker exit in Q2. Norwegian rivals Bakkerud and Solberg are fifth and sixth.

Ekstrom's new EKS stablemate for the event, fellow Audi DTM driver Nico Muller, impressed with the third-fastest time in practice, but spun in Q1 and hit a wall, dropping him to last of those that completed the full race distance.

In Q2, Muller dominated the opening encounter and was ninth fastest on times.

In the intermediate classification at the end of the first day, Muller is 17th, three places higher than Alister McRae, who on his World RX debut set the 18th-fastest time in Q1 but jumped the start in Q2 and had to take two joker laps as a result.