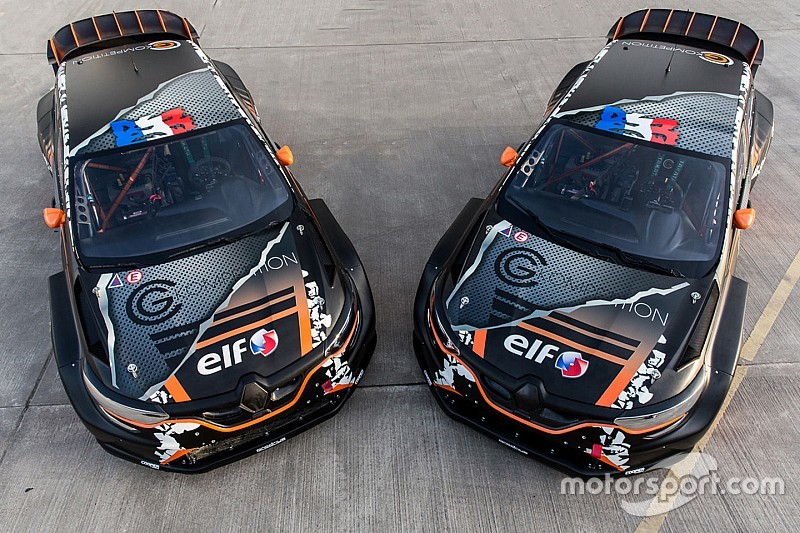 The technical specification and race livery of the GC Kompetition World RX team’s Prodrive-built Megane RS RX has been revealed.

GCK revealed the car in its final 2018 livery in Paris on Wednesday, while at the same time Prodrive lifted the lid on the new car’s specification.

Much secrecy has surrounded the new Banbury-built Supercar since the project was first announced 14 months ago. It ran in public for the first time in the second official pre-season World RX test at Silverstone last week, but technical details were kept under wraps.

The Megane is a clean sheet of paper design by Prodrive, which has focused on optimising the car in the three key areas for the World RX regulations; powertrain; suspension and sub frame.

The chassis and engine have been designed in house by the former World Rally Championship-winning outfit, while a unique five-speed transmission has been designed and built in collaboration with Xtrac.

The decision to create a unique four-cylinder, two-litre turbo charged engine, which is mounted longitudinally in the chassis, was taken by Prodrive to “avoid any compromises and optimise the drivetrain.” Heavy items such as the turbo charger and starter motor are mounted low in the front of the chassis.

Moving the brakes in-board has significantly reduced the unsprung weight at each corner of the car, where a double-wishbone suspension design and lightweight wheels (since they do not need to house the brakes) have been implemented.

Unlike Volkswagen Motorsport’s title-winning Polo Supercar, which had its engine cooling located in the front of the car, the Megane sticks with rallycross tradition of having its radiator mounted in the boot area, fed by ducts in the rear quarter panels, but unlike other machines in World RX, the warm air from the Megane exits through the rear floor section, rather than the boot.

“I genuinely think that the two cars that we’ve done this year; the new Aston and the new RX project are the best we’ve done in the 34 years I’ve been at Prodrive,” technical director David Lapworth told Motorsport.com.

“And I mean that in absolute terms, but also relative terms. Of course, I’d be disappointed if we weren’t doing a better job than we did 34 years ago, and we are. But I think even relative to our competition, these are two very good cars.”

The team revealed the final livery of the design at the Automobile Club De France. “The livery of the Megane R.S RX really reflects where we’re trying to go with GCK on this project: Aggressive, daring, exposed and bold,” said lead driver and GCK owner Guerlain Chicherit.

The first round of World RX takes place in Barcelona next week. “I’m more confident than ever going into an event, whilst debuting a brand new chassis and custom engine that has seen a lot of time and energy go into its innovative design. There’s a lot of work still to do, really, we’re still developing the Megane R.S RX but I can’t help but be excited.”