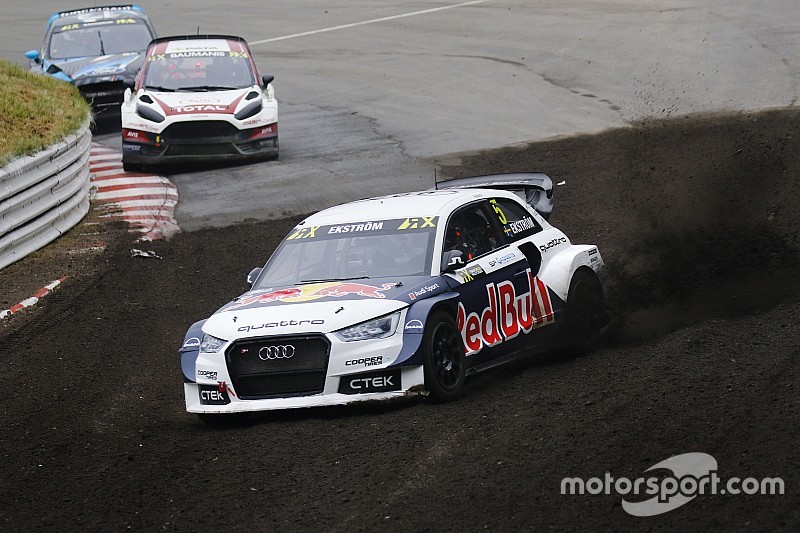 In a weekend when he could claim his first ever FIA World title, Mattias Ekstrom ended the first day of competition at the German round of World Rallycross at the Estering top in the Intermediate Classification.

Ekstrom posted the fastest time in Free Practice at the very end of the hour-long session, but was beaten in his Q1 race by Janis Baumanis by the smallest of margins, and was also headed on the time sheets by EKS team mate Toomas Heikkinen.

However, Ekstrom won the last race of Q2 after making the best start from the middle of the grid and surviving the infamously difficult first corner squeeze to be fastest and moved into top overall, as Baumanis finished second on track to be fourth overall and is second at the end of day one.

If he takes a maximum score from this weekend by topping the Intermediate Classification, winning the semi-final and final, he will be champion regardless of what his rivals can do at the final event of the year in Argentina.

After a season of not being able to match the results of Peugeot-Hansen stable mates Timmy Hansen and Sebastien Loeb, Frenchman Davy Jeanney was eighth and then second fastest in Saturday’s qualifying races puts him third at the end of day one at the circuit where he dominated 12 months ago and claimed his first of two World RX victories.

Andreas Bakkerud is fourth overall with Heikkinen fifth ahead of Kristoffersson. Double champion Petter Solberg got held up behind a battle between Hansen and Loeb in Q1 and was 12th quickest.

The Norwegian made the best start in his Q2 race but ran wide at the first corner and invited Kevin Eriksson the opportunity to make a move on the inside, but Solberg was able to hold on around the outside of the second corner and win his race.

Third fastest elevated him to seventh overall, one place up on former arch WRC rival Loeb, who finished second to Jeanney in a race that included all four Peugeot-Hansen 208s in Q2.

On his second World RX appearance of the season, American Tanner Foust suffered from boost issues in practice and was 17th in Q1.

Broken right-rear suspension in Q2 caused him to spin and retire, leaving the former event winner in 21st position.

Gigi Galli also had a challenging day, 22nd in Q1 he failed to complete the race distance in Q2 with technical dramas that brought his unique Kia Rio to a halt.