Niclas Gronholm leads the final round of the World Rallycross Championship in South Africa at the end of day one, as points leader Timmy Hansen ended the first day highest of the title protagonists. 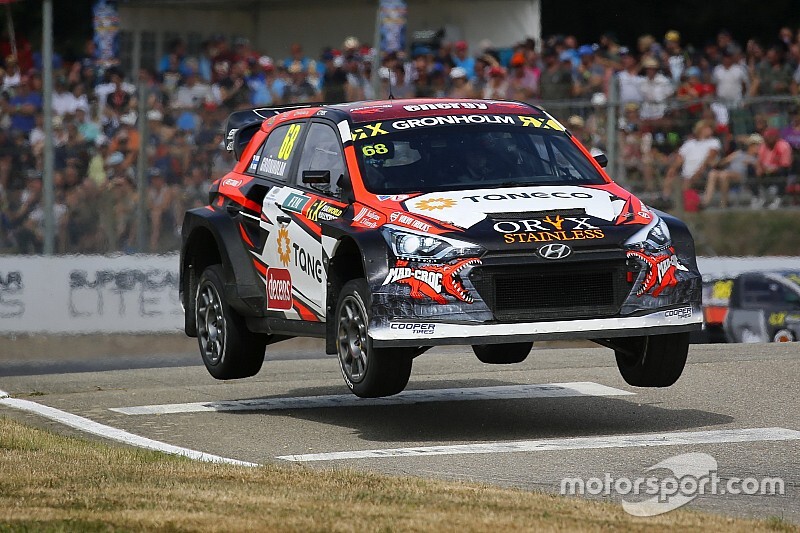 Outside of the fight to become the 2019 champion, Gronholm was third fastest in Q1 by winning the first race of the weekend, then despite the randomly reversed race order for Q2 where the fastest drivers from Q1 raced first, Gronholm again won on track and set a time that wouldn’t be bettered.

Timmy Hansen had been fastest in Q1 and took an early joker in the Q2 encounter after he dropped to third in the opening corners, allowing brother Kevin a safe path around the outside at turn two in the sister Peugeot.

The elder Hansen brother then finished third when the three ahead took their jokers on the final tour. However, with the track having been watered before the session, Hansen brothers Kevin and Timmy could only manage sixth and ninth, with Andreas Bakkerud in 12th.

Norwegian Bakkerud, second in the standings by a single point heading into the final round, was second fastest to Hansen in Q1 after winning his race but is sixth overnight following the Q2 run, while Hansen held onto second.

Gronholm meanwhile overcame the slippery conditions in Q2 with the GRX squad’s Hyundai i20 and was fastest, with triple European Champion Timur Timerzyanov setting the second best time to make it a one-two for the Finnish squad in the session. The Russian lies third overall.

Missing from the front of the order is British driver Liam Doran. Engine problems in free practice meant the unit had to be changed by the EKS-operated RX Cartel team and Doran missed the start of his Q1 race by just 10 minutes.

Further problems in Q2 left him off the back of the pack in the last race of the qualifier and he is 15th overnight, only ahead of Cyril Raymond. The Frenchman was disqualified from Q2 for accumulative track marker infringements.

Raymond’s GCK Academy teammate Guillaume De Ridder however delivered his performance of the season to win the last race of the day in the team’s Renault Clio, and set the third best time in Q2 to be eighth overnight.

Gronholm to miss Spa WRX round with appendicitis