Timmy Hansen moved to the head of the World Rallycross Championship standings by a single point with a fight back drive to victory at the Latvian round. 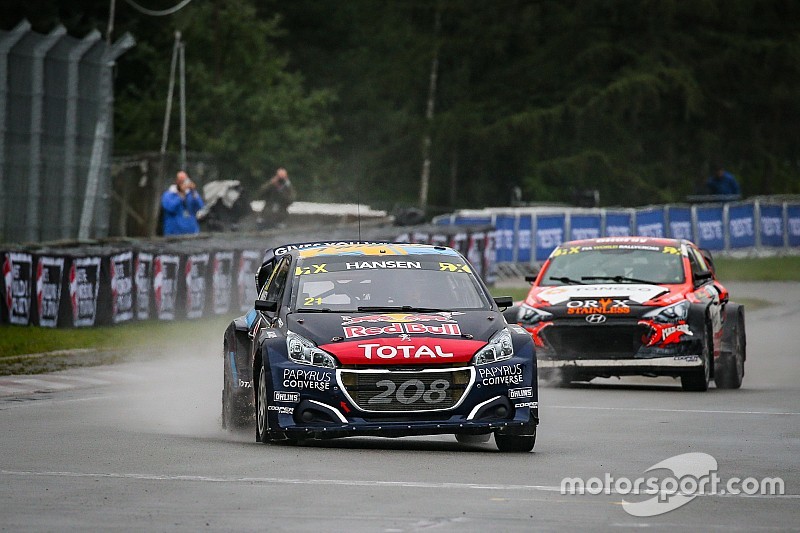 Hansen placed 15th overall after the opening day at the Bikernieki circuit in Riga, following retirement from Q2 after turn one contact with European Champion Robin Larsson.

As bone dry conditions turned to full wet on Sunday morning for the remaining two qualifiers, Hansen was set the best time in Q3 and Q4 to climb to second in the Intermediate Classification, behind points lead Andreas Bakkerud.

The Norwegian entered the Latvian round two points ahead of Hansen brothers Timmy and Kevin, and stayed out of trouble through qualifiers three and four on Sunday morning, following Timmy Hansen through their Q4 encounter to secure top qualifier position in the Intermediate Classification and extend his championship margin by a single point.

Bakkerud then survived a dramatic opening corner in semi-final one from pole position, where contact with fast starting Renault driver Anton Marklund coupled with all six of the competitors running deep, dropped the Audi racer to second after the first sequence of corners.

He immediately dived up the inside of RX Cartel teammate Liam Doran into turn four to take the lead and claim victory, to secure pole for the final.

Hansen meanwhile started the front row of semi-final two alongside teammate and brother Kevin, the elder of pair the making the best start from pole as Kevin Hansen shut the door on Latvian driver Reinis Nitiss to run second, where the duo would finish.

With the rain having eased but the circuit still soaking, Hansen then made the best launch of the front row protagonists in the final, while Timur Timerzyanov made the best start of all from the third row but ran wide at turn one.

Bakkerud dropped into the pack through the turn one and two chicane, before holding fourth on the opening tour by passing teammate Doran, who was also jumped by Kevin Hansen in turn three.

Timerzyanov ran third on lap one, but made a mistake at the hairpin after the jump and ran wide, handing the place to Bakkerud before diving into the joker.

Bakkerud would also make a mistake at turn eight while running behind Gronholm on lap three, as Gronholm went straight to the joker and dropped to third, ahead of Kevin Hansen.

Had Bakkerud remained in seconds position to the finish, the points would have been equal at the top of the table heading to the season finale in South Africa, but when the Norwegian took his joker, he dropped back behind Gronholm.

Despite pressuring the Hyundai driver all the way to the finish, he ended the Latvia event third, as Hansen took a final tour joker to claim his fourth win of the season and move back into the series lead.

For the second round in a row, outgoing Super1600 champion Rokas Baciuska held the qualifying lead after the opening day, but a slow start from the front row of the grid in semi-final one was followed by first corner contact and he didn’t make final.