Runaway World Rallycross points leader Johan Kristoffersson dominated the opening day in the Latvian round of the series, twice setting the best time in the first two qualifying sessions. 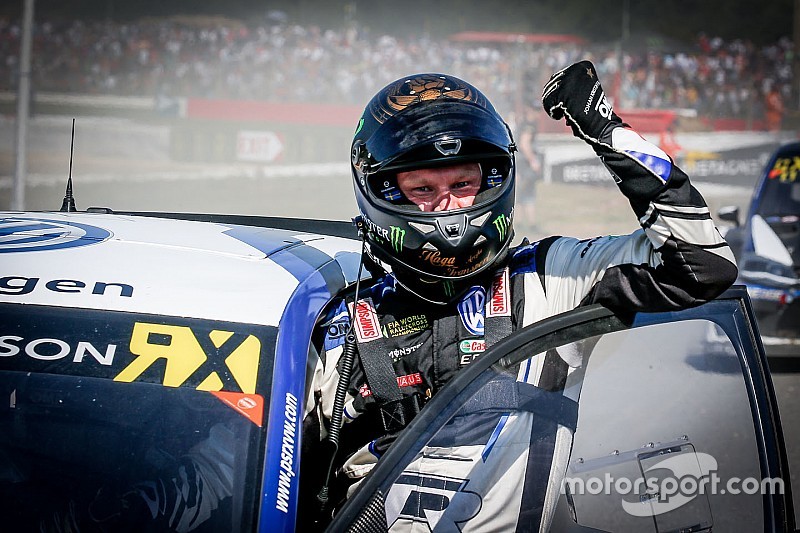 Kristoffersson won the final race of both Q1 and Q2 to top the order, as Audi driver Mattias Ekstrom set the best time in free practice and Peugeot campaigner Sebastien Loeb ran Kristoffersson close for the fastest time in Q1, before being slowed by accident damage in Q2.

Kristoffersson, Ekstrom and Loeb all won their races in Q1, but as Ekstrom couldn’t match the time set in the first race of the weekend by Loeb, Kristoffersson survived the bottle-neck turn one to get away and beat Loeb’s time by less than one hundredth of a second, over the four-lap run.

The Swede then made the best start in the final race of Q2 to take victory and set the fastest time, chased by Ekstrom, who was second quickest and lies second overnight, the former DTM champion having been third in Q1.

Third overnight, Petter Solberg had a consistent day with fourth and then third. The Norwegian ran side-by-side with Ekstrom into turn one in Q2, then had contact with Loeb at the exit of turn two, then ran the Frenchman wide, Loeb just kissing a tyre wall with the front of his Peugeot 208 WRX but managed to avoid a more disastrous outcome.

Q2 wasn’t a good session for either Peugeot however, as Loeb was slowed by the damage sustained from his brush with the wall and Timmy Hansen appeared to break his 208's steering over the joker lap jump, then spun in the final corner while trying to make it to the finish line. Loeb was 11th but Hansen ended the second run 18th and is 12th in the Intermediate standings.

Ekstrom’s teammate Andreas Bakkerud won his Q2 race and was fourth fastest ahead of MJP Racing Team Austria driver Toomas Heikkinen and Niclas Gronholm in a strong showing for both Finns.

The third EKS Audi, driven by Nico Muller, was forced into a spin in the second corner of Q2, while former Le Mans winner Alex Wurz spun in his Q1 race but had a close battle with Olsbergs MSE pair Robin Larsson and Kevin Eriksson in Q2 and is 16th overnight, two places down on Muller.

Solberg was nearly forced to stand down due to illness

Latvia World RX: Kristoffersson closes in on title with win