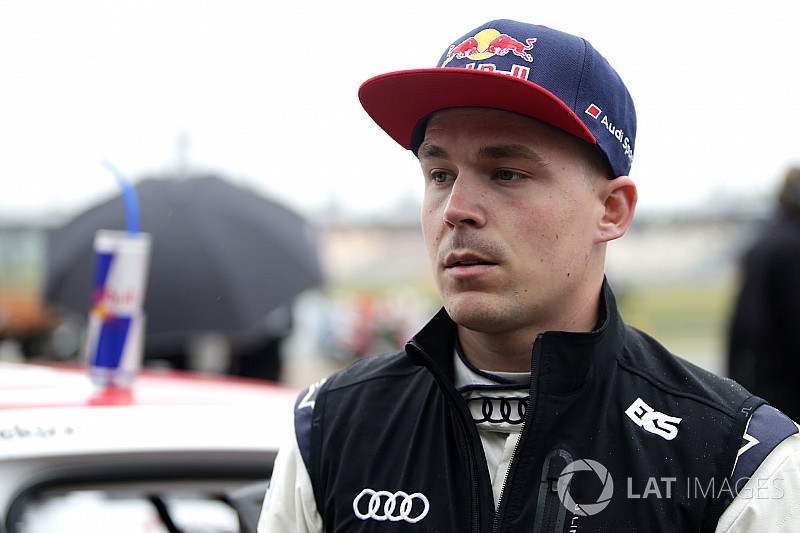 EKS Audi driver Toomas Heikkinen leads the Latvian round of the World Rallycross Championship at the end of the opening day.

Mattias Ekstrom's team-mate had been fifth fastest in Q1 on a bone dry Riga circuit, before the heavens opened ahead of Q2.

Heikkinen made the best start from the outside of the grid in the last race of the day in Q2 to snatch the lead from polesitter Johan Kristoffersson at the first corner before resisting pressure from the points leader in the opening laps.

The EKS squad pre-empted Kristoffersson's joker lap and sent Heikkinen into the joker on lap three, and was followed by Kristoffersson.

At the exit of the extra route section, Ekstrom, who had taken his joker on lap one in the same race and closed the gap to those ahead, was able to pass Kristoffersson and finish second to his teammate on track.

Further behind, Kristoffersson's PSRX colleague, Petter Solberg clipped a wall, causing significant damage to the left-rear suspension of former two-time WRX champion Volkswagen Polo GTi. He finished the race, albeit over 30 seconds down on Heikkinen's time.

Having been fastest in Q1, Kristoffersson was sixth in Q2 and remains second at the end of the opening day, with Hoonigan Racing Division driver Andreas Bakkerud third.

Sebastien Loeb made the best start in the penultimate race of the weekend from the outside of the grid and led from the front, as Bakkerud had to fight his way up through the field.

When Loeb took his joker on the final tour, Bakkerud was able to undercut the Frenchman's Peugeot on the way to the finish line to claim victory by the narrowest of margins, fighting back from free practice mechanical dramas.

Loeb is sixth at the close of the opening day, with Ekstrom and Hansen fourth and fifth.

Despite his Q2 issues, second time to teammate Kristoffersson in Q1 leaves Solberg eighth at the end of the day, behind local hero Reinis Nitiss.

Nico Muller made it four EKS Audis in the top 12.

Nitiss' fellow Latvian, Janis Baumanis, survived Q2 first-corner contact with Ken Block in his STARD-run Ford Fiesta to be inside the semi-final qualifying positions, but Block was not so lucky in the move, spinning off as a result of the contact and is 14th.

It was a torrid day for the MJP Racing Team Austria outfit. Double DTM champion Timo Scheider made it to the end of his race in Q1 16th fastest, but completed the final two laps of the encounter with the car on fire due to damage caused to a turbo pipe.

After crossing the finish line, the German dived out of the car before the flames were extinguished, but the damage was significant enough to force him out of Q2.

His teammate, Kevin Eriksson, also failed to complete Q2, his Fiesta left on the start line, the pair propping up the leader board.