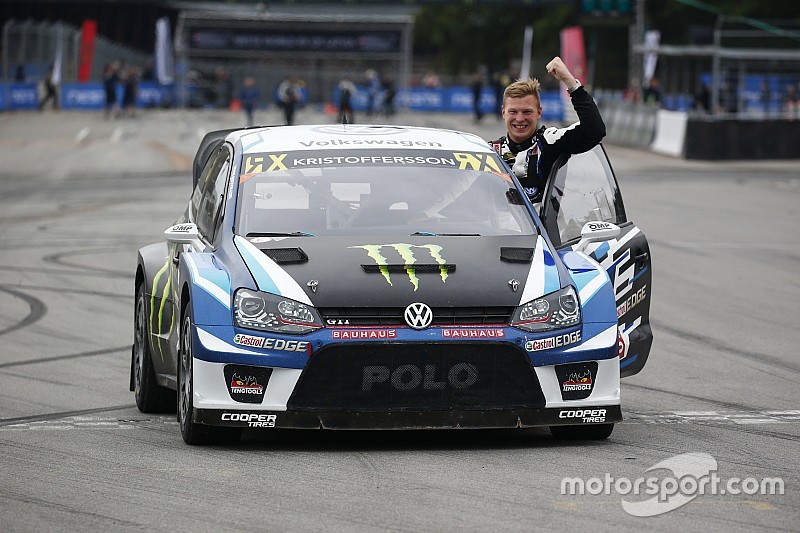 Johan Kristoffersson won his fifth consecutive World Rallycross event at the Latvian round of the series to secure the 2017 drivers’ championship title with two rounds remaining.

The PSRX Volkswagen Sweden team also claimed the teams’ championship title, despite Kristoffersson’s teammate Petter Solberg crashing out of the event at the first corner of semi-final two and being taken to hospital for precautionary checks.

Replicating his recent run of form, Kristoffersson made the best start in the final and led the race throughout, crossing the finish line by 2.3 seconds ahead of outgoing champion Mattias Ekstrom, before heading into a series of celebratory donuts with the dominant Volkswagen Motorsport-built Polo GTi Supercar.

Latvian star Janis Baumanis climbed from sixth on the grid to be second after the left-right first corner sequence, capitalising when Ekstrom and front row man Sebastien Loeb ran side-by-side to Turn 1, Loeb dropping back after being forced wide.

Ekstrom quickly repassed Baumanis into turn three, then resisted pressure to the rear of his Audi S1 before pulling a gap to the STARD driver.

Andreas Bakkerud made a slow launch from the back row of the grid but with the pack bunched up in the opening corners, the Norwegian caught up to the back of DTM driver Nico Muller, racing in only his second World RX event.

Having dropped down the order, Loeb took his joker on the opening tour and passed Bakkerud when the Norwegian also took his extra route, diving out from behind Muller on the entry.

Loeb’s quest to salvage the podium proved a success when Muller and then Baumanis both took their extra routes, moving the Frenchman to third place overall behind Ekstrom and Kristoffersson.

The accident that ended Solberg’s weekend was at the first corner of semi-final two. Having starting on the front row, the Norwegian was forced wide at Turn 1, hit the wall and stopped following further contact before the race was red-flagged.