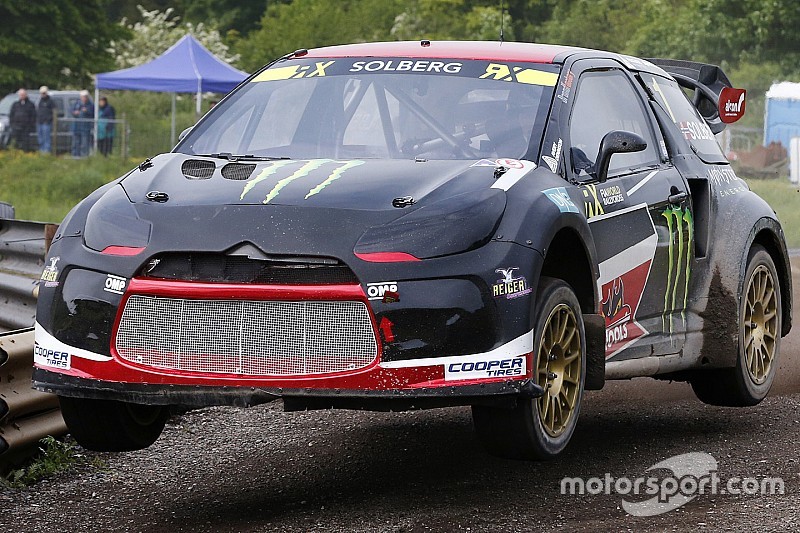 Reigning World Rallycross Champion Petter Solberg leads the way after the first two qualifying races at the British round of the championship at Lydden Hill.

Solberg, who won at Lydden last season, set the fastest time in both Q1 and Q2 to top the order.

The Norwegian won the final race in Q2 with a clever joker on the third lap, covering off championship leader Mattias Ekstrom behind, the Swede pushing his title rival hard on the opening lap before taking his extra-route joker.

Solberg has made a number of changes to his privately-run Citroen DS3 in the two week gap from the previous round in Belgium.

“I’m very happy,” he said. “You have to be clever and I had good information about the lap times in the last race, so that’s why we took the joker when we did. It was a fantastic race.”

“We’ve done a lot of changes to find what we have been missing in the last two races, and it’s paid off.”

Such was Solberg’s pace in the last race of Q2 that he set a time just under two seconds fastest than Peugeot-Hansen driver Timmy Hansen, who had been fastest up until that point.

The Swede’s time was good enough for second in Q2 and he is fourth overall, with Ekstrom second and Hoonigan Racing Division driver Andreas Bakkerud third.

Bakkerud had pushed Ekstrom hard in the final qualifying race of the day, but lost time with a mistake, on a circuit that visibly suits the longer wheel base of the Ford Focus RS RX.

Finn Toomas Heikkien is fifth overall, ahead of Kevin Hansen in sixth, the young Swede celebrating his 18th birthday with an accomplished drive on a circuit he knows well, having learnt his trade in Junior Rallycross in the UK.

Heikkinen and Hansen had a close race in Q2, Heikkinen just coming out on top when Hansen took his joker on the fourth lap of their race.

Volkswagen RX Sweden drivers Johan Kristoffersson and Anton Marklund are seventh and eighth, the pair racing together in the last race of Q2, Kristoffersson passing Marklund on the third lap but suffering from a noise from the transmission during the race.

He would have been higher up the order, but for a technical fault that caused his Peugeot 208 to cut out momentarily in Q1, before beating fellow former rally driver Guy Wilks in Q2.

Before his issues in Q1, Loeb led Andreas Bakkerud in his race and may have set the fastest time but for his problem.

Wilks himself jumped the start in Q1 and had to take two joker laps as penalty. Still trying to acclimatise himself to the OlsbergsMSE run Ford Fiesta, and dial the setup to his liking, the British driver is 14th overnight, just outside the semi-final qualifying positions.

Five-time British Rallycross Champion Julian Godfrey rolled his Ford Fiesta in Q1 but thanks to a huge effort from his team, he made it to the grid of Q2 just in time.

Timerzyanov’s World RX Team Austria colleague Janis Baumanis had been sixth fastest in Q1 but limped through Q2 with what appeared to be a broken rear driveshaft, from warming his tyres.

Reinis Nitiss and Niclas Gronholm both lost time when they came together in the first corner of their Q2 race, while Peugeot Hansen Academy driver Davy Jeanney suffered two punctures and a boost issue in Q1.