When Nelson Piquet Jr. made his Formula One debut, the expectations were sky-high as comparisons to his father, who was crowned World Champion three times, were inevitable.

However, the infamous 'crashgate' affair quickly brought his F1 dream to a bitter end. Afterwards, the young Brazilian threw himself to the deep end to rejuvenate his career in the world of NASCAR.

Now he is reinventing himself once more – his newest focus is on the Global Rallycross Championship. In order to get some more mileage under his belt he traveled to the UK to take part in the RX Lites races supporting the World RX at Lydden Hill. 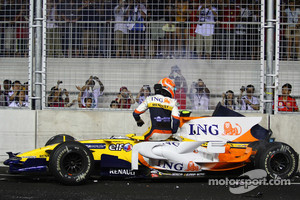 Nelson, do you miss Formula 1?

"Well, because I was there just for a couple of years. I wasn't there for a long time."

When it comes to pure racing, how would you compare Formula 1 to NASCAR and rallycross?

You have been team-mate to Fernando Alonso during your time in Formula 1. He is considered to be the type of driver who wants to have a team built just around him. He had a conflict with Lewis Hamilton, then he sidelined Felipe Massa at Ferrari. How was it to be his team-mate?

You've been racing in NASCAR for the last few years. Is it a closed chapter now?

"No, I just got the opportunity to do rallycross full season and NASCAR wouldn't have been with a top team."

Many drivers with a background in Formula 1 and single-seaters went to NASCAR...you, Jacquese Villeneuve, Dario Franchitti, Juan Pablo Montoya and few others.

"You can't compare Dario Franchitti – he did one season of Cup and didn't even get prepared for it. Villeneuve – he did six road course races or whatever, so that's not the same as I've done. The only one who's done what I've done is Montoya. Maybe that's all... Scott Speed and Montoya – they were the only ones." 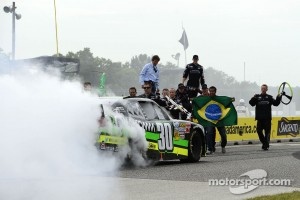 Why is NASCAR so hard for drivers coming from single-seater? What is the main difficulty?

"The drivers in NASCAR, they've been doing this since they were born. It doesn't mean that just because you came from Formula 1 you can be the best at everything else. David Coulthard or Ralf Schumacher – all these guys went to DTM and did (expletive), nothing. People have this stupid mentality that because you are in Formula 1, you're the best driver. That doesn't mean anything."

I've read an interesting piece by Karun Chandhok. He expressed an opinion that racing various cars after leaving Formula 1 can make you a better driver.

"The reason why he become a better driver is because it's more of his level. F1 was not his level. He's a nice guy, I've known him a long time, but Chandhok is not at a level to be in Formula 1. He scored, I think, one win in GP2 in three years. Drivers need to find their comfort zone and F1 was far away from his comfort zone."

What about you? Did you learn from NASCAR and rallycross?

For a driver of your calibre isn't RX Lites a step backwards?

"It's very narrow minded to think that way. I bet that any F1 driver will come and sit in a Lites car and they not gonna beat these drivers. For me it's just practice, it's learning, it's running against younger drivers."

Your father did the Indy 500. Is this race on your list of things to do?

"I would do IndyCar, maybe a road course, but I would never sit in an IndyCar for the first time in the Indy 500. For example what Kurt Busch is doing this year in my opinion is totally crazy."

What's your plan for the rest of the season?

"Rallycross is my main thing. Obviously I have a lot of open weekends so I can fill them up with things."