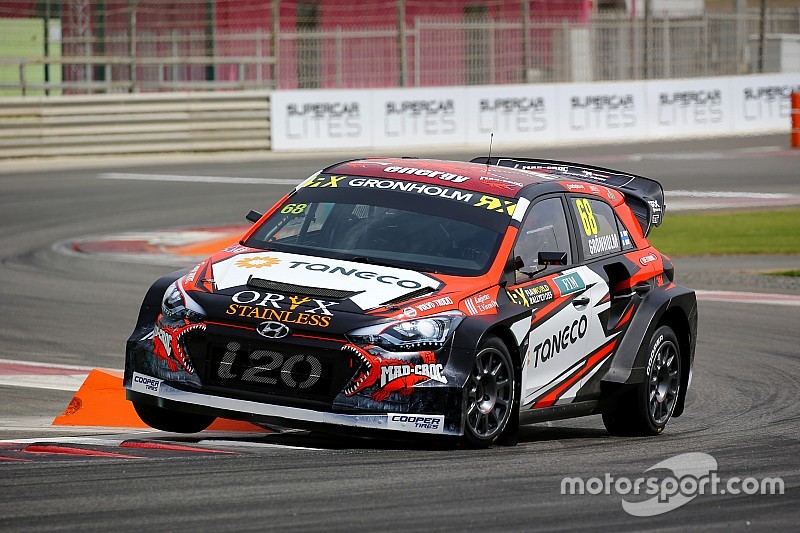 Niclas Gronholm, son of two-time World Rally Champion Marcus, mastered the conditions in the opening day of World Rallycross’ Norwegian round in Hell.

Having been forced to skip rounds three and four of the series due to an appendicitis operation, Gronholm prepared for his comeback with a brief shakedown in Finland last week, before topping the time sheets in each session on day one at the Lankebanen circuit.

Fastest in Free Practice, despite pulling off in the first session and returning to the paddock, Gronholm won the race to turn one from fourth on the grid in Q1 and bettered Andreas Bakkerud’s benchmark by over 1.7 seconds.

The Finn then made the best launch in the last race of Q2, led the final encounter of the day from the front and beat the previous fastest time in the session, set by double DTM champion Timo Scheider, to be fastest, and lead overnight.

Not only does Marcus Gronholm’s team lead a World RX event on day one for the first time, but it’s a one-two for the Hyundai i20 team, with triple European Rallycross Champion Timur Timerzyanov second in the intermediate classification thanks to a pair of first-lap jokers and climbing back through the field.

He was second to Bakkerud on track in Q1 and second to teammate Gronholm in Q2.

While Gronholm’s first day back couldn’t have gone better, it was a frustrating affair for championship leader Timmy Hansen.

Despite making the best start in Q1, the Swede was slowed after contact from Janis Baumanis that sent the STARD driver into a high-speed spin and onto Guillaume De Ridder’s Renault Clio.

As Baumanis dragged his damaged car through the race, De Ridder’s machine was left on the racing line in the joker lap, meaning Hansen lost time on his final-tour extra route.

He then raced in traffic in the final race of Q2, passing former works WRC driver Kevin Abbring during the race and battling with Bakkerud. Hansen is fifth overnight, behind Bakkerud in fourth.

Third after the first two qualifiers is Scheider, the Munnich Motorsport driver having his best day of the season so far, winning both of his races.

Abbring’s first rallycross start since he began his motorsport career racing in the junior division of Dutch rallycross events started well with eighth in free practice, and fifth in Q2.

He benefitted when Bakkerud touched the rear of Gronholm’s i20 at the first corner of their Q2 race and went wide, leaving a gap on the inside.

But the Skoda Fabia pilot dropped time after his lap three joker and was later slowed by an issue on the final tour, eventually ending up ninth in the intermediate classification.