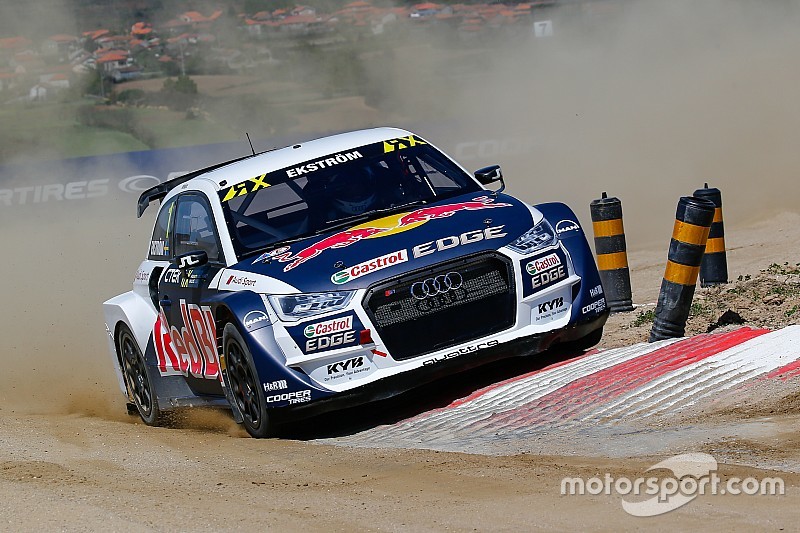 Ekstrom and Petter Solberg won their semi-finals to start on the front row of the final, with the latter getting the better launch away from the start line.

As the Norwegian took the standard route on Lap 1, Ekstrom headed straight into the joker lap section.

Kristoffersson pressured the rear of his colleague’s Polo hard in the opening two laps, before Solberg suffered a slow left rear puncture, delaying his teammate.

Kristoffersson took the lead heading down the main straight to start Lap 3, as Solberg jinked out into the joker, rather than protect his teammate.

Nitiss climbed up to second, hassling Kristoffersson in the following corners as Ekstrom moved into third.

Behind, Peugeot-Hansen teammates Sebastien Loeb and Timmy Hansen had both taken a Lap 1 joker and fought among themselves on the opening lap, but hung onto Ekstrom’s coat tails.

By the fourth lap, Loeb was all over the rear of Ekstrom’s Audi S1, with Hansen attached to the back of his teammate.

Nitiss released EKS team owner Ekstrom into second by taking his joker on Lap 5, and returned to the main circuit fifth, by which point it was damage limitation for leader Kristoffersson ahead of the chasing pack.

The Swede took his joker on the final tour and returned to the main circuit just fractions ahead of Timmy Hansen, as up the road Loeb was lining up a move on Ekstrom for the lead.

Heading through the last corners on the loose section of the Montalegre lap, Loeb pressured Ekstrom as hard as he could without making undue contact, and stuck the nose of his Peugeot 208 up the inside at the end of the long right-hand loose corner for the final time, but couldn’t find a way by.

Ekstrom held on to win and extend his championship lead to 14 points, with Loeb right behind and Kristoffersson completing the podium, despite losing time earlier in the race.

“I must say this is one of my hardest fought wins in rallycross. We were not really on the pace, especially as Johan (Kristoffersson) this weekend. Also Seb (Loeb) and the Peugeots have been very fast,” said Ekstrom.

“We knew this would be difficult one, we decided to try and do our own work and see what happened at the end.

"I’m super happy for myself because it’s always nice to win but as a team owner to have all three cars in the semi-finals is really nice.

"It was a really enjoyable fight (with Loeb) and to see so many cars close together, it’s a great way to win a race when the competition is so hard.”

Hansen was fourth, with Nitiss fifth and Solberg completing the race with his Polo running on the left-rear wheel rim.

Ex-WRC star Duval returns to World Rallycross for home round