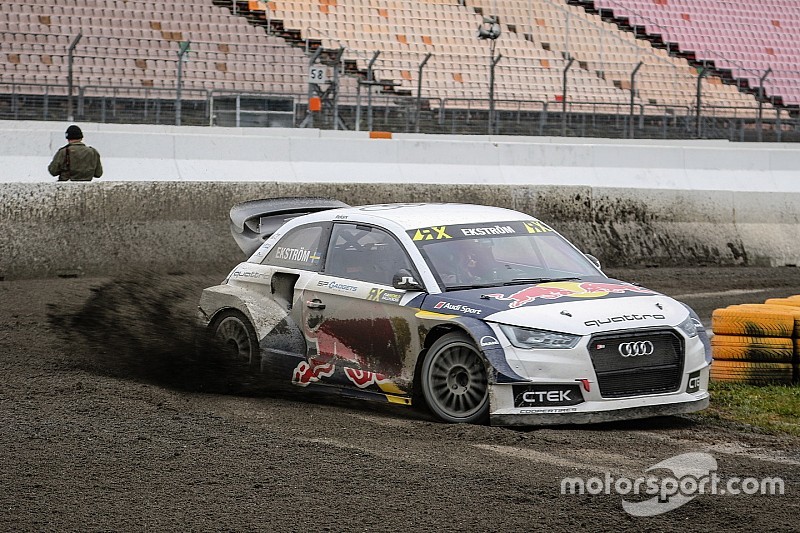 Two-time DTM champion Mattias Ekstrom heads the order at the end of day one in the opening round of the FIA World Rallycross Championship in Portugal.

The EKS Audi S1 driver set second fastest time in Q1, winning the final race of a session which was dominated by heavy rain – a number of drivers either running wide or making mistakes on the loose section of the Montalegre circuit and dropping time.

Starting in the final race of Q2, Ekstrom led home new teammate Toomas Heikkinen, who had been third in Q1, and 2015 Portugal winner Johan Kristoffersson to top the order.

Making his debut for the Hoonigan Racing team in the new Ford Focus RS RX, Bakkerud was fourth fastest in Q1 despite jumping the start and having to take two joker laps as penalty.

In heat two he took his joker on the first lap and passed World RX newcomer Sebastien Loeb during the race. Bakkerud is fourth overall at the close of play on day one, with Loeb fifth on his debut for the Peugeot-Hansen team.

Loeb made a great start in Q1 and led his race until the final lap when he took his joker. He may have set a faster time than he did in Q2, but for out braking himself in the first corner on lap three.

Loeb’s Peugeot-Hansen team mate Timmy Hansen was eighth fastest in Q1 but jumped the start in Q2 and like Bakkerud in the first session, had to take two jokers.

He finished 14th in Q2 and is currently 12th overall, just inside the qualifying positions for the semi-finals.

European Championship event winner Liam Doran opened his first campaign with the JRM Racing team well in Q1; he finished behind Ekstrom and was sixth overall.

In Q2, he won the penultimate race of the day on track but failed to take his compulsory joker lap, the resulting 30 second penalty putting him 17th in Q2 and 13th overnight.

Reigning Swedish rallycross champion Kevin Eriksson set the fastest time in the morning’s free practice as the session ended and the track was at it’s driest.

He was 9th in Q1 and 7th in Q2 to be sixth at the end of day one, one place ahead of two-time World RX champion Petter Solberg, who ran wide on the slippery loose section in Q1.

As a result, he started in an early race in Q2 and with the track drying throughout, he was sixth quickest and is seventh overall.

He went off in Q1 but did finish and was seemingly hampered by technical issues in Q2. Block is 17th overall ahead of Q3 and Q4 tomorrow morning.

Loeb: "More to come" from Peugeot in Portugal