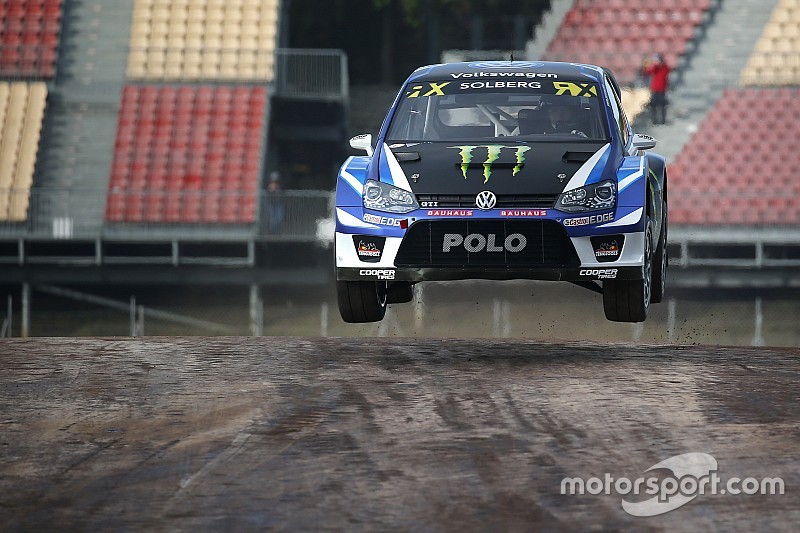 The PSRX Volkswagen Sweden team continued to dominate the Portuguese round of the World Rallycross Championship at Montalegre, as double champion Petter Solberg finished on top after the qualifying stages.

Solberg stopped the clocks first in Q3, and was second fastest in Q4 to claim first place.

Starting side-by-side and finishing behind Johan Kristoffersson in Q3, Solberg won after his teammate was handed a 30-second penalty for not taking his compulsory joker lap.

Despite being 21st overall in Q3, and only 12th in Q4, having won the first race of that session, Kristofferson’s stellar first day performance means he remains third overall in the Intermediate standings.

Reigning champion Mattias Ekstrom improved to second overall on Sunday morning, winning his Q3 race to set the second fastest time. He then chased Solberg in the final qualifying race of the event in Q4.

The Swede was passed by his EKS stablemate Reinis Nitiss on the final lap when the former took his joker, but that didn’t affect Ekstrom’s overall position.

Like Kristoffersson, Sebastien Loeb’s task was made more difficult on the second day in Montalegre, the Frenchman losing time with a spin in Q3. He made contact with the rear of a spinning Kevin Eriksson on the loose section.

The nine-time World Rally Champion made amends in Q4 with a brave move to take the lead into the first corner, and eventually win his race and set the third fastest time. That elevated him to fourth overall.

Less fortunate was Eriksson, who spun and retired in Q3, and dropped out of the semi-final qualifying positions for the second event in a row.

MJP Racing Team Austria teammate Timo Scheider, who had a podium finish in the season opener in Spain, joined him on the sidelines.

Latvian duo Nitiss and Janis Baumanis delivered solid performances on Day 2, Nitiss climbing up the order in part due to passing team owner Ekstrom, and thus finishing second to Solberg on track in Q4.

Baumanis didn’t make the semi-finals in Round 1, but seventh and eighth places in Q3 and Q4 ensured he qualified sixth overall, joined by STARD teammate Timer Timerzyanov in ninth.

On the back of a torrid opening day, Andreas Bakkerud entered into Sunday morning in Portugal with little to lose, but won both of his races on track, sixth fastest in Q3 and fastest of all in Q4, lifting him to tenth in the Intermediate standings.

Despite arguably his best performance to date in World RX, Niclas Gronholm just missed out on a place in the semi-finals in 13th.