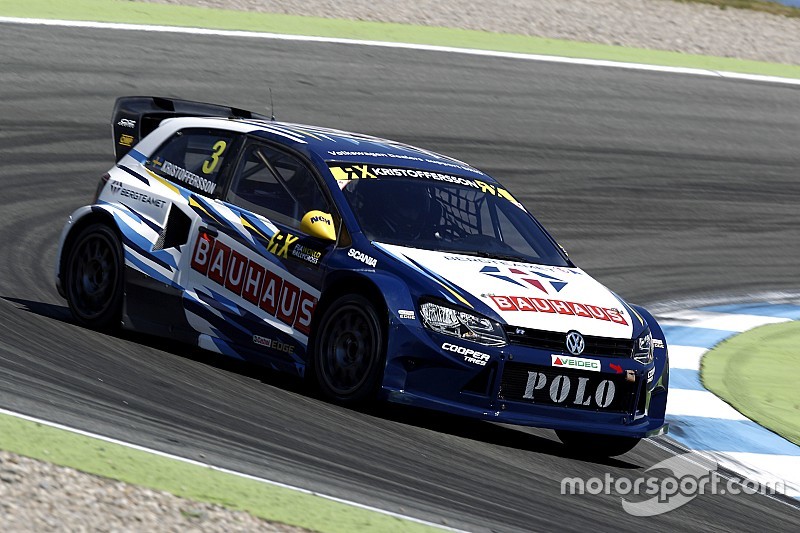 Johan Kristoffersson and Anton Marklund once again proved the pace of the Volkswagen Polo RX Supercar.

Volkswagen RX Sweden drivers Johan Kristoffersson and Anton Marklund once again proved the pace of the Volkswagen Polo RX Supercar by qualifying for the semi-finals in the fourth round of the FIA World Rallycross Championship at Lydden Hill and challenging for a place in the final (May 29).

Marklund and Kristoffersson finished seventh and eighth overall at the end of day one, and progressed through Q3 and Q4 on day two to make the semi-finals. In the knock-out semi-final races, Marklund got stuck behind another driver and didn’t make it into the final, while Kristoffersson was set to make the final for the third time from the opening four events of the season, but a puncture put him out of contention. Foust was forced out of the event on the second day with a freak technical issue.

It’s very positive that we have both cars in the semi-finals for the second event in a row.

“We had some small issues in practice which continued into Q1, but we had a good race and finished fifth. In Q2 it wasn’t the best but we managed to be tenth,” said Kristoffersson. “We improved the car a lot for Sunday but we’re still missing some speed, we need to find a few tenths. In the semi-final I was in the position to move into the final but we had a puncture.”

Marklund was delighted with the continued strong pace of the Volkswagen Polo RX Supercar at Lydden Hill. “We showed great speed here, especially in practice. We ended third after a really good drive in Q1, but in Q2 I struggled a bit in the dust. Unfortunately in Q3 I got a puncture, which put me into 11th in the Intermediate Classification,” said Marklund. “In Q4 the track was watered before our race so the track got faster, but I was really happy to stay P11 for the semi-finals. In the semis, the pace really was there; it’s just a pity that we got stuck behind Kevin Eriksson because we could have made the final. Semi-finals is good, but the pace was certainly there for better than that. I’m looking forward to the next race in Norway, a track I really like.”

Foust enjoyed returning to World RX in the 2016 Volkswagen Polo RX Supercar. “I knew the car was faster than I was able to show on the first day, I made a few small mistakes, but unfortunately we had some problems today that just couldn’t be solved,” said Foust. “It’s awesome to come to a track I know. After practice I was fourth quickest but I felt like I had made some errors and there was more pace to come. The level is very high; you really cannot afford to make mistakes. The team has built a great car and I’m looking forward to getting another chance in it in Germany.”

Volkswagen RX Sweden Team Principal Michael Schneider was pleased to have both cars in the semi-finals. “It’s very positive that we have both cars in the semi-finals for the second event in a row. The pace was good, but we lost time with punctures during the event which was unfortunate,” said Schneider. “Johan is still third in the standings so that is good. We’re looking forward to continuing our good pace into the next event.”

The fifth round of the FIA World Rallycross Championship takes place at Hell, Norway (June 11 – 12).

World RX returns to Hell for round five