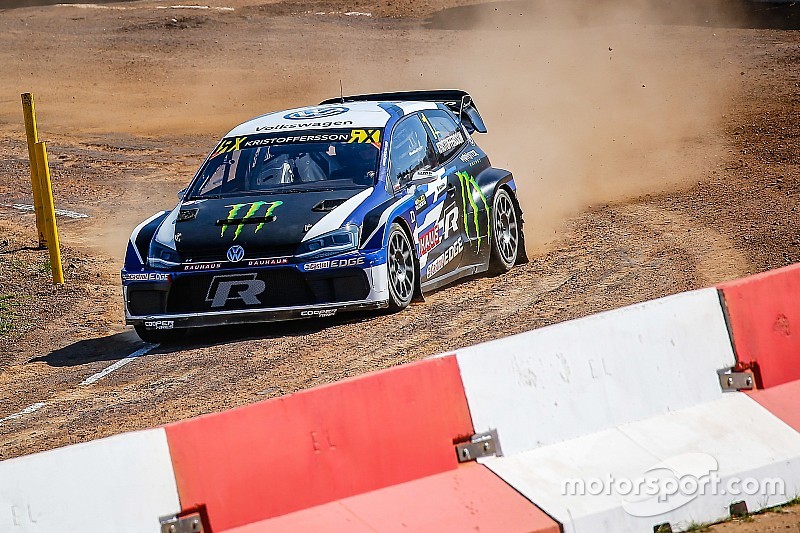 The already-crowned champion lined up on the front row for the final race of the year alongside PSRX Volkswagen teammate Petter Solberg, and the pair made an equal launch in the run to turn one.

As Kristoffersson held the inside line though the long right-hander, Solberg sent his Volkswagen Motorsport-built Polo sideways.

Solberg just held second from a fast-starting Mattias Ekstrom onto the loose section for the first time, the Audi driver having passed Peugeot pair Sebastien Loeb and Timmy Hansen in the first corner shuffle.

Ekstrom then dived up the inside of Solberg into the turn four right-hander on the opening lap, forcing the latter wide across the grass. But Ekstrom himself ran wide at the exit of the chicane, allowing Hansen to pass both.

Hung out on the left-hand side of the circuit, Hansen was left with no option but to take the extra-route joker at the first opportunity and was followed by teammate Loeb.

Chasing leader Kristoffersson, Solberg spun into the wall at turn three and although Ekstrom and the older-specification Peugeot driven by Kevin Hansen made it through, Solberg’s Polo was collected by Timmy Hansen’s 208, causing immediate damage to the front-right corner that forced him out.

Younger brother Kevin took his joker at the same moment, which promoted Loeb to third behind Ekstrom, the former DTM ace electing to take his joker on lap three to cover off the Frenchman.

He succeeded, and while Kristoffersson had built a big enough advantage to take his extra route on the four tour and maintain his lead, Ekstrom held off Loeb to the finish.

The pair were flanked by Kevin Hansen, who again missed out on a maiden podium.

Kristoffersson’s repeat of his 2017 victory at the Killarney circuit netted him his 11th victory of the 12-round season, leaving third-place finisher Loeb the only man to join the Swede on the winners list this term.