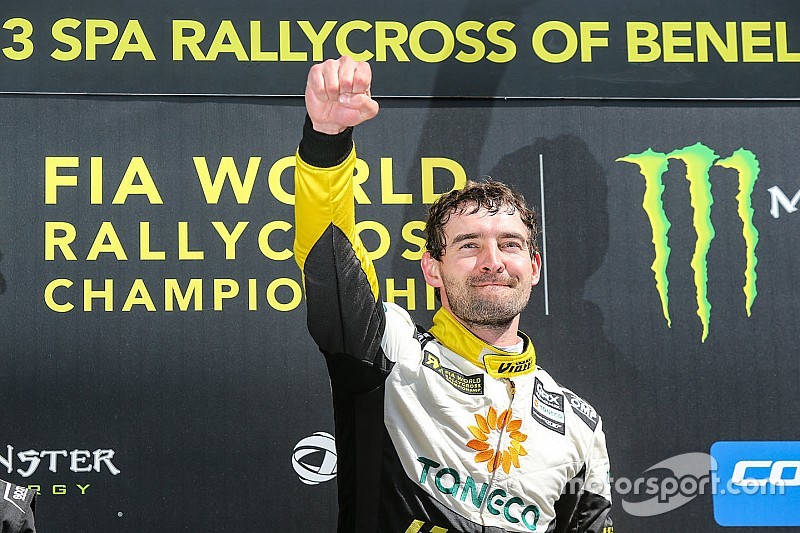 The Russian driver started on the second row of the grid for the final at Spa, but led after the opening corner when pole-sitter Andreas Bakkerud ran rallycross returnee Joni Wiman wide into Turn 1, having made a poor getaway from the lower-grip grid position slot.

Timerzyanov had pressured Bakkerud throughout their semi-final encounter but with the positions reversed on the road in the final, Bakkerud couldn’t live with the Gronholm RX pilot’s pace, who led from the front, took his joker on the final tour and sailed to a popular win, the first for Marcus Gronholm’s squad in World RX.

Bakkerud’s cause wasn’t helped by contact that sent his Audi S1 sideways from teammate Liam Doran on lap one when Doran sailed up the inside of Janis Baumanis into the Raidillon hairpin and also touched the rear of his colleague’s S1.

Having been sent into the wall at turn one and dropping to last, Timerzyanov’s GRX teammate Wiman passed Timmy Hansen when the Swede took his joker at the first opportunity, then cleared Baumanis when the Latvian jokered on lap two.

Baumanis dropped into a position-swapping battle through Spa’s banked loose-surface final corner with Hansen, the Swede eventually coming out on top to finish fourth ahead of the STARD driver, as Wiman was able to joker on the fourth tour to maintain a podium position on his first World RX start since the Canadian round in 2015.

Bakkerud finished second, while Doran made it to the end in sixth.

Timerzyanov’s victory in his sixth World RX campaign and only the first time he has remained with the same team for two consecutive seasons came in his 64th series start. Bakkerud’s second podium helped to lift the Norwegian back up the standings after his low-scoring opening round in Abu Dhabi.

Championship leader Kevin Hansen went out of the event in the semi-finals while he bid for the final podium-qualifying position over the finish line with Doran, but maintained his position at the head of the standings, while former champion Mattias Ekstrom also went out in the semis, having also been forced in the wall on the outside of the first corner.