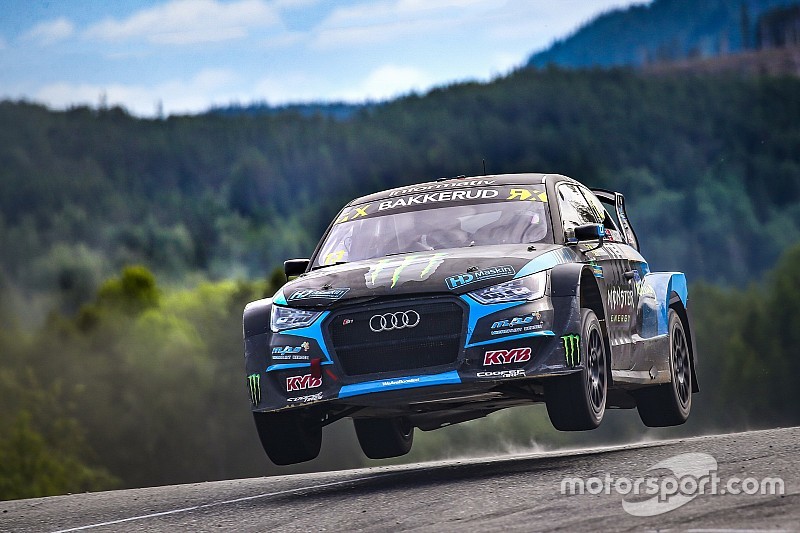 Andreas Bakkerud holds the overnight lead in the Swedish round of the World Rallycross Championship with a composed performance in challenging conditions and an unusual results order.

Bakkerud beat RX Cartel teammate Liam Doran to the first corner in the last race of Q1 and led from the front to set the fastest time.

But by virtue of a randomly reversed race order for Q2, Bakkerud was forced to run in the first race on track, after heavy rain had fallen on the Holjes circuit.

Running in the only race where all five cars ran wet tyres, Bakkerud again led from the front and extended a margin over title-rival Kevin Hansen during the race to claim victory and initially hold the fastest time.

However, track conditions improved significantly throughout the session, meaning the Audi S1 pilot ended up 12th, but still maintained the overall top spot.

Anton Marklund and Kevin Abbring, both challengers for victory in the previous round in Norway, showed their Norwegian pace was no fluke by ending the opening day in Sweden second and third, but the pair had contact in the first corner of their Q1 encounter and went off the circuit.

Marklund then won the third race of Q2 and Abbring beat championship leader Timmy Hansen to victory in the next race, despite a number of mistakes in the changeable conditions, to fight back up the order.

Double 2019 event winner Hansen, who leads the series by a single point from brother and teammate Kevin, had a torrid day.

Starting from the outside of the grid in Q1, Hansen made up ground at the first corner by landing sideways over the circuit’s first jump, and punctured his right-rear tyre. He made to the finish with 20th time.

Despite a good start in Q2 he was forced to take an early joker, then lost time in traffic on the opening lap.

Despite finishing behind Abbring on track with fourth fastest time in Q2, Hansen remains 16th overnight and is currently out of the semi-final qualifying positions.

The fightback story of the day was reserved for reigning European Rallycross Champion Reinis Nitiss.

Making his second appearance of the season in a third car for Marcus Gronholm’s GRX squad, Nitiss turned sideways before the first corner in his Q1 race, hit the large kerb on the inside of the off-camber bend and rolled heavily into the gravel trap on the outside of the circuit.

Despite significant damage to the car, the roll cage remained intact and the Finnish team repaired the car for Q2.

With no time to his name, Nitiss was 25th after Q1, but by making the best start in the fixed Hyundai i20 from the outside of the grid in the last and crucially driest race of Q2, he fended off the attentions of a flying Guerlain Chicherit to set the fastest time and climb back to an amazing fifth overall.

Such was the nature of the up-turned order that with a ninth and tenth best time in the first two sessions, and on his return to the series, Kevin Eriksson ended the day fourth, with Chicherit sixth.