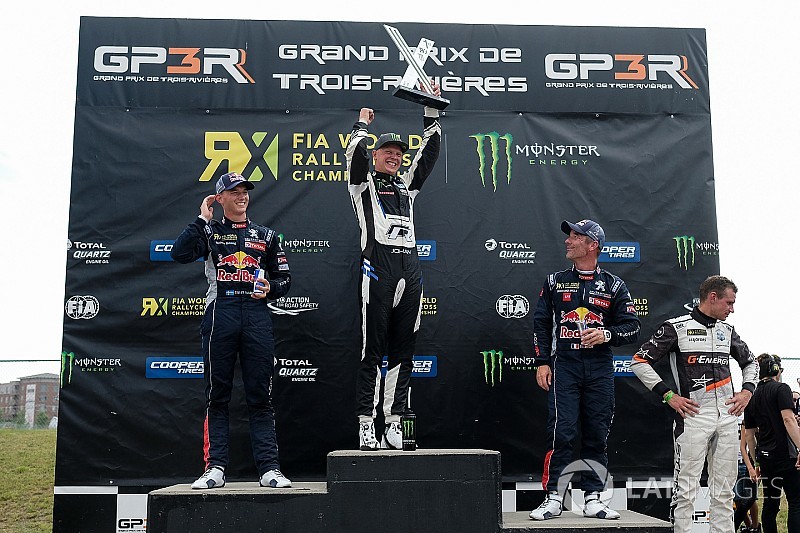 Johan Kristoffersson claimed his sixth win of the 2018 World Rallycross Championship season with a fightback drive at Trois-Rivieres worthy of his world champion status.

Ninth on day one, points leader Kristoffersson entered day two with a damage limitation strategy, but fastest time in Q3 and Q4 elevated him to the top of the Intermediate Classification by a single point ahead of overnight leader Sebastien Loeb, who had dropped time in Q3 after post-joker contact with Mattias Ekstrom.

Volkswagen driver Kristoffersson then led both the semi-final and final throughout in his now customary dominant fashion, but might have had to fight harder for his second consecutive Canadian victory had compatriot Timmy Hansen not made a mistake at turn five on the opening lap of the final and lost a second to the race leader.

Hansen held onto his wayward Peugeot 208 and remained second on track, bunching Ekstrom, Petter Solberg, Loeb up behind, as Janis Baumanis dived straight for the joker.

Ekstrom had made the best start away from the line, but, having seen fellow Audi driver Andreas Bakkerud storm his way between Loeb and Hansen into the lead of semi-final two from the second row of grid, Kristoffersson and Hansen closed the gap to give the DTM champion no way through. Behind, Solberg slammed the door on Loeb into turn one.

Solberg took his joker on the second tour and remained ahead of Baumanis, before Ekstrom and then Hansen jokered in the next two laps to cover off those behind, releasing Loeb to second behind Kristofferson.

Aware that Hansen, driving Peugeot’s new 208 WRX, had the pace to challenge him for victory if he made even the smallest of errors, Kristoffersson also took his joker on lap five to fend off the threat, and was followed by Loeb.

Hansen cleared his team mate for second, but Kristoffersson was clear in front and managed the gap for the final lap to secure another victory and further extend his points lead to 55 points.

Outside the top three, Solberg hassled Ekstrom for fourth for the final two laps but could find no way by.