By:
Dominik Wilde
, Journalist
Listen to this article

If rallycross could write its own memoir, you can bet that the chapter about 2018 would be one of the most intriguing.

Just four years ago we were all talking about rallycross being the next big thing – Global Rallycross had just secured Red Bull backing and had huge manufacturer involvement in the shape of Hyundai, Subaru, and Volkswagen, while over in Europe IMG and the FIA had got an all-new world championship off the ground.

Fast forward to the present day, and GRC is six feet under, while World RX is also seemingly going through a crisis of its own as well.

The year started with GRC dogged by rumours and negative press with it beset by ever-mounting debts and discontent among its entrants and suppliers. The messy ordeal saw the series finally laid to rest once all of the Supercars contingent decided to walk – despite a full calendar (including a trip to Lydden Hill in the UK) being announced.

Rallycross in the United States was on life-support. The IMG-led Americas Rallycross series and the one-off Nitro Rallycross event however proved there was still life left in the discipline over the pond.

Back in the world championship, things started off strongly. Manufacturer involvement from Volkswagen, Audi, and Peugeot, plus strong privateer representation of Ford, Hyundai, and Renault machinery showed the series was in good health, while calendar expansion to the US and a move to Silverstone for the UK round showed clear intent from the championship’s organisers to establish the series firmly as one of the world’s top championships.

However, the series’ plan to move to an all-electric formula in the next few years seemed to be the series’ undoing. Originally pencilled in for 2020, the move was pushed back to 2021 by the summer.

The electric World Rallycross format is set to be a series with a spec Oreca chassis and Williams Advanced Engineering batteries, with manufacturers providing motors and bodywork. As many as nine different manufacturers were said to be interested in the new green rules, with Audi, Peugeot and VW thought to be among them.

All three manufacturers actually increased their involvement in World RX ahead of the 2018 season in anticipation of a future electric programme, but by the end of the season all three had made the shocking decision to walk away from the series.

PS RX Volkswagen Sweden was set to be the sole factory-backed entrant going forward, until this week it too announced it would be stepping away from the world championship after winning back-to-back titles.

The reason for Peugeot’s departure was World RX’s failure to fully commit to a direction regarding electric rallycross, while Audi decided to focus its electric efforts on its Formula E programme instead.

Volkswagen’s withdrawal was officially because of the ‘loss of competitors’ in the series, although it stopped short of saying it was pulling out entirely, instead insisting it was to ‘sit out the 2019 series’.

The series needed four carmakers to sign up to its new electric revolution by August 15, but an alleged lack of clarity left most walking away – despite more than double what was needed originally showing an interest.

It’s an interesting predicament that rallycross finds itself in. In the five seasons that it has been a major player on the world stage, costs have soared to an obscene level. The road-relevance of electric rallycross, on paper at least, should have led to manufacturers queuing up at the door to get in, now we’re all left wondering if it will even happen.

In the meantime, ARX has announced two of its venues for next season, with Circuit of the Americas and Mid-Ohio already on the fledgling series’ calendar for 2019, with more set to be confirmed, while sometime World RX campaigner Max Pucher has set to work reviving the GRC name as a new low-cost internal combustion European championship that will take in traditional venues like Lydden Hill and Montalegre in Portugal .

Rallycross is now at a crossroads. Does it please the fans and the privateers with the low-cost but traditional route, or does it try and woo the manufacturers by forging ahead with an electric formula? 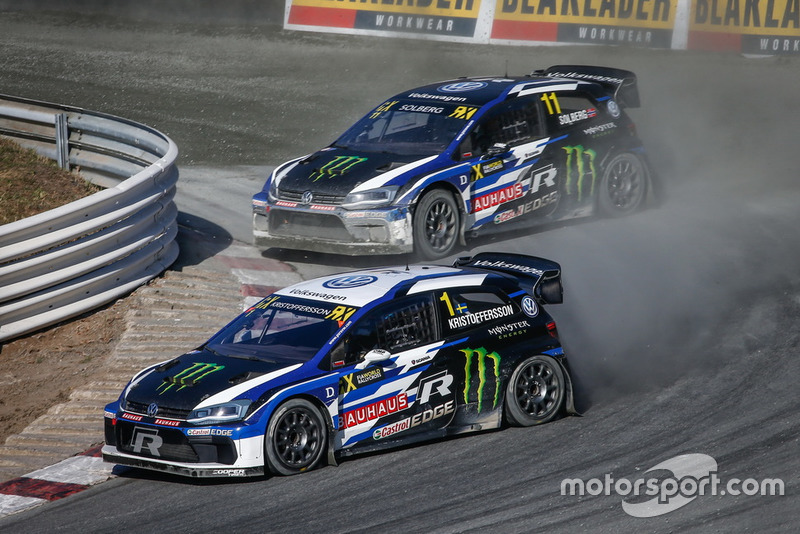 Brad Keselowski's Penske record will be 'tough to beat'

The World RallyCross Championship's electric era will start at Norway's Hell track on 13-14 August after delays to allow teams to ready their new cars.

Johan Kristoffersson won the first round of the FIA World Rallycross Championship's double-header at the Nurbugring while championship leader Timmy Hansen was disqualified, trimming his deficit to just four points.