Featuring unpredictable conditions throughout, the Rally de Espana caught out many competitors. After having to retire on day one, Thierry Neuville and Nicolas Gilsoul (Citroën Junior World Rally Team) returned to action on day two and produced a fine, consistent performance on tarmac.

Competing for the first time in a World Rally Car, Hans Weijs Jr. and Bjorn Degandt (Qatar World Rally Team) were clear in sixth place until they went off the road on Sunday morning. 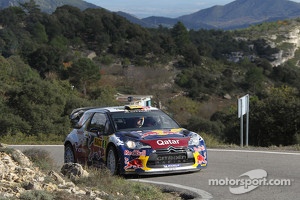 The WRC calendar’s only mixed surface round, with one leg on gravel followed by two days on tarmac, Rally de Espana served up some highly variable weather conditions this year.

Rain fell throughout Thursday night and into Friday morning, completely soaking the stages in the south of Catalonia.

Thierry Neuville and Nicolas Gilsoul were forced to retire early on, after going off on SS2. “I knew that this leg would be difficult and I wanted to get through it and begin the tarmac stages in the best possible shape.

We had the right tyres, the right set-up and we were driving a very sensible pace. But the more cars that went through the stages, the more the racing line became rutted, and it was really bad on one corner.

We broke part of the suspension as we went through the corner and the wheel was ripped off. It’s all the more frustrating as I don’t feel like I made a mistake. We are going to rejoin on Saturday under Rally2 rules, but it will be difficult to get motivated again.”

On Saturday morning, the Belgian crew struggled to build up their confidence again: “The stages were wet and we had to adjust our pace notes whilst contending with brake problems.

The team is going to sort it out at the service park and I think it will be easier this afternoon. As we are familiar with this surface, we'll be able to push a bit harder.

On the first runs, up against drivers who have been competing here for years, we had no chance of being among the leaders!”

Thierry and Nicolas did indeed sneak into the top 5 fastest drivers in the afternoon. The pattern was very much the same on Sunday, with a significant improvement between the two runs.

The no.8 Citroën DS3 WRC ended the Rally de Espana outside of the points, in 12th place overall.

Thierry therefore finishes his first World Championship in seventh position: “There’s no doubt I would have preferred to finish this rally with a good result, but I was a bit short on luck to do that.

I would like to thank the entire team for placing their trust in me and giving me some invaluable advice, which helped me to keep improving at every rally. This season has been a much-needed learning experience. I hope I can show my true value in 2013.”

After taking it extremely cautiously on Friday, the Dutchman ended day one in seventh position: “It wasn’t easy, because I had only competed in one gravel rally in wet conditions before.

I made a few mistakes, but we were able to continue and made it to the end of the leg. That was my goal, and I think it will be easier on tarmac.”

More comfortable on Saturday, the 2010 World Junior Championship runner-up strictly observed the instructions given to him by the team.

After checking and adjusting his pace notes on the first run, he pushed a bit harder to try and narrow the gap between his times and those of the leading drivers. Unfortunately, whilst running clear in sixth, he had to retire after a roll on SS15: “It was my fault.

I misunderstood one of the pace notes and we went off the road. One of the wheels was ripped off, so we couldn’t continue. Obviously, it’s disappointing, because we could have ended our first rally at this level by scoring some good points.”