Today’s route took in another two loops of three stages covering 146.28 kilometres of competition to the northwest of Faro.

Volkswagen Motorsport driver Sébastien Ogier has powered into the lead of Rally de Portugal, overhauling his rivals to pull out a 38.1 second advantage with 43.87 competitive kilometres to run on Sunday. Mikko Hirvonen has slipped to second and Mads Østberg has moved up to third following the retirement of Ott Tanak.

Today’s route took in another two loops of three stages covering 146.28 kilometres of competition to the northwest of Faro. Ogier was the dominant force this morning; the Frenchman won the opening stage and claimed the lead after another victory in the following stage. Despite Hirvonen pushing hard, Ogier gradually extended his advantage throughout the day, claiming a hat-trick of wins this afternoon, and heads into the final day with a comfortable lead. Behind second-placed Hirvonen, Mads Østberg has moved into third after Fiesta RS WRC driver Ott Tanak rolled in stage 10, a disappointing exit after an impressive showing on Friday. 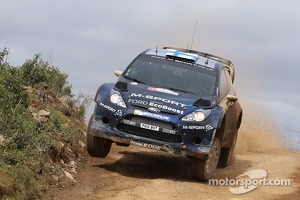 Dani Sordo continues to fly the flag for Hyundai Motorsport and the Spaniard is fourth, a highly-encouraging performance as the team continues development in its debut season in the WRC. Team-mate Thierry Neuville was fifth but in the penultimate stage picked up suspension damage and a puncture. Despite losing time he maintained position but dropped yet more time in the final stage to slip to ninth. As such, Henning Solberg moved into fifth and Andreas Mikkelsen up to sixth. Driving to regain his confidence after a difficult event in Mexico, Mikkelsen had run without problems today but lost the power steering in SS11. Martin Prokop, Juho Hänninen and Nasser Al-Attiyah - driving a regional rally car - round off the top of the leaderboard in seventh, eighth and 10th respectively. After retiring yesterday, Robert Kubica re-joined the field under Rally 2 regulations but went off the road in the second stage and damaged the clutch trying to get back on. Kris Meeke was the only driver unable to re-start today, the roll cage in his DS3 WRC too badly damaged to continue.