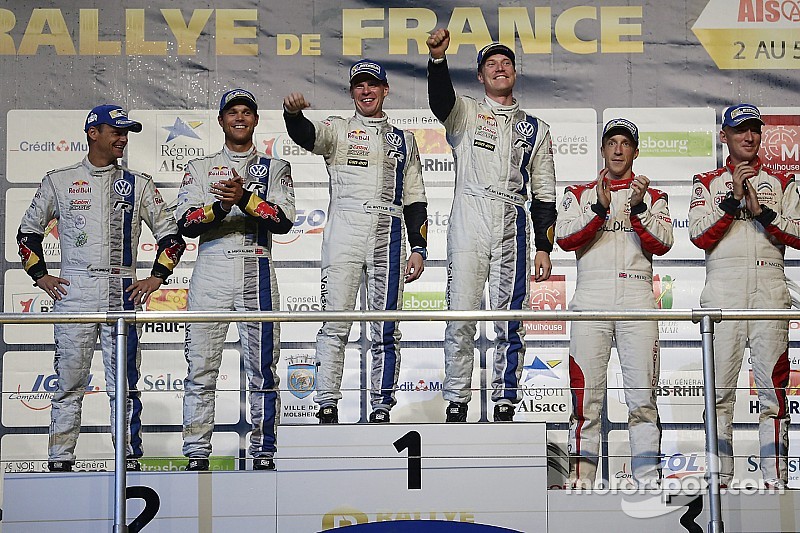 Jari-Matti, a Finn winning on Tarmac! Marcus Grönholm did it in Monte Carlo and then you have to go back 15 years to see this with Tommi Mäkinen in Sanremo. You achieved it this week-end and this is your first win on tarmac. How does that feel?

J-ML: It feels amazing. If we go back to 2008 in Catalunya driving the Ford Focus rally car and losing six minutes to Sébastien Loeb who won the rally… Six years, a minute per year! It’s been long but we did it. It’s been my dream to win. For a couple of times it’s been close but I had to do a mistake in Germany to understand and be able to control myself in the leading position. It was a raw mistake but it gave me that control feeling that I have today. The experience helped.

Does this win make up for that loss?

J-ML: Of course. Unfortunately my team-mate Sébastien Ogier had a technical problem and he lost some time but he won the Power Stage. But I am really relieved we could win this tarmac rally and keep the championship alive.

The Drivers’ Championship is absolutely alive. You need to do a lot to try and get it.

J-ML: Yes, the team is not giving up. We try to get a good feeling for Catalunya and keep the fight on. It’s good for everybody that we keep fighting!

You had a great feeling here. The times were incredible and I think Andreas called you “crazy” after seeing one of your times. You seemed really confident?

J-ML: Yes it was after stage 6 when Miikka was checking the tyre pressures and Andreas passed us and showed us that he was impressed. Then I realised that maybe our time was quite good. It’s only later that I heard we did the fastest time on the stage. It was one of those moments when you have a perfect stage. There were some stages where I pushed and had a perfect feeling and that’s where we did some strong times. I must say that Andreas (Mikkelsen) was also very impressive.

Between what he did in Germany and here, finishing second and chasing me, the speed he drove is really great. I can’t remember Scandinavians finishing first and second on a tarmac rally, we have to check in our historic records! Kris also had a great performance. He has been doing nice podiums in a row. It’s nice to fight with those guys.

It must give you a huge amount of confidence for the next rally, a mix of tarmac and gravel. You are full of fight now, as you said?

J-ML: Yes, in Catalunya I think the gravel is very important. You don’t make huge differences on tarmac. On gravel you need to start very strong. On tarmac if you lose 20 seconds it’s almost impossible to catch up. I like the stages and the characteristics of the roads in Spain.

MA: Yes it’s a great feeling and it was a long time ago when a Finn won a tarmac rally. In theory there is nothing special about a Finn or a Scandinavian winning on tarmac, we also drive on tarmac don’t we?

You had huge pressure on your shoulders this weekend but there hasn’t seemed to be any drama. Did you have any moments that you would like to tell us about?

MA: To be honest there has been no moment. The biggest moment was on the road section when I was trying to get notes from the safety crew in time, check the tyres and also get to the time control on time, that was the most stressful moment we had. I must add that I was impressed in a positive way by the times of Andreas. They have done very good progress. I always felt that it was okay for us. We had a little bit of pressure but we were able to handle it.

Andreas, Jari-Matti mentioned your very good times in Germany but here you did incredibly well with great results.

AM: It’s my best second place because last year I missed Germany and I missed most of the tarmac days of the Catalunya Rally. So Germany this year really was my first proper tarmac event, if you except Monte Carlo, so we took it as a test. We were really lucky and fortunate to take the third place there. For this rally we had some good test and for the first time I really felt confident on tarmac. We had a great fight with Jari-Matti from the beginning.

He was pulling away especially on the second day and it was hard for us to keep his pace without taking any big risks. In our position we focused on Kris to control our gap. On the first day I pushed a little. It was a really good weekend with no mistakes and no moments so we can’t wait to go to Spain where we are completely free now because of the Championship standings.

You said you wanted to secure your third place in the Championship. You certainly have this weekend haven’t you?

AM: Yes I really want that third place and now it’s more or less secured but I still have to fight.

You must be looking forward to Spain after such a strong showing here?

AM: Spain is a very nice event. I did most of the gravel stages last year which are quite competitive. I feel confident going to Spain. There will be some long stages there that will be very important. I look forward to Spain with no pressure.

Ola, can you tell us some stories?

OF: I am happy, and just happy!

Kris, another consistent result. How are you feeling about third place?

KM: I am feeling stronger and stronger. I learnt also from Germany: to inherit the lead and to lose it so quick was quite difficult to swallow at the time but it makes you stronger. Today I was comfortable in my own place. I was concentrated just to take the podium for the team today. I really tried hard on day one but couldn’t keep the pace of Jari-Matti and Andreas. If I had pushed more I could have made a mistake. There’s quite a chance for second place in the Manufacturers’ Championship and we’ll see how it goes in the next two rallies.

Two more rallies to go, Spain and GB, two rallies you have done in the past. How do you feel about those?

KM: Spain we have a little experience with the Mini in 2011. Good memories of the last stage’s mistake where we found ourselves on soft tyres… Regarding GB, everybody says that it’s the one for me but I have done it only one time in the last eight years when Jari-Matti is going there for the thirteenth time in a row, no fourteenth! I am going to keep pushing. I enjoy the rally and I enjoy its conditions. Maybe fourth place is possible in the Championship, we are only 10 points behind Mikko (Hirvonen) so I think it would be a nice reflection of our performances of the second part of the year. It has been a good weekend for us and we are looking forward to the next rallies.

We talk about the Championship, but can you tell us about next year?

KM: No not really. I believe everybody is waiting to see what we will do on rallies we have done before. Our performances since Poland have got stronger and stronger and consistency has been there. I hope it’s enough to secure our place next year. I would really like to continue and I believe I haven’t reached my full potential yet. Times arrive during the second or the third year in the Championship so I am still a young boy heading my way. I hope and think it will happen.

Paul, Miikka mentioned how hard it was for co-drivers. Not only reading the notes but also having to do things between stages. What a great result for you this weekend?

How are you feeling about heading to Spain?

PN: It’s a good rally, we’ve gone there before. The first day will be very important. It’s been three years since we’ve been there. We hope to get a good result. GB will be a great challenge.

Jost, a new victory for Volkswagen this season and the first win on tarmac for Jari-Matti, how do feel about it all?

JC: It’s impressive to see how quick is the learning curve of Jari-Matti. From Germany to here, there was a great improvement and it was absolutely fantastic to see how he performed here to get his first victory on tarmac today. Also Andreas did a fantastic job. They confirmed that they can get the speed. We feel sad for Séb; he couldn’t win the title on his home rally. At the end of the day, it’s nice to keep the Championship open.

Will Andreas be free to go for it and fight for victory in the next two rallies?

JC:  Now, the Manufacturers’ Championship is done and it’s only a fight for the Drivers’ Championship between Séb and Jari-Matti, they can go for it and I will be very happy for Andreas if he wins his first rally. He can definitely go for it.

What was Sébastien Ogier’s feeling during this weekend?

JC: Both he and Julien were not in a good mood. Yesterday was a bit better and today they did a fantastic job. The time in the Power Stage was absolutely outstanding. He’s now quite on a good mood again. Everything can happen in Spain so we will see. It will be great if the Championship would remain open till Rally GB.

Double rations for the DS3 WRCs