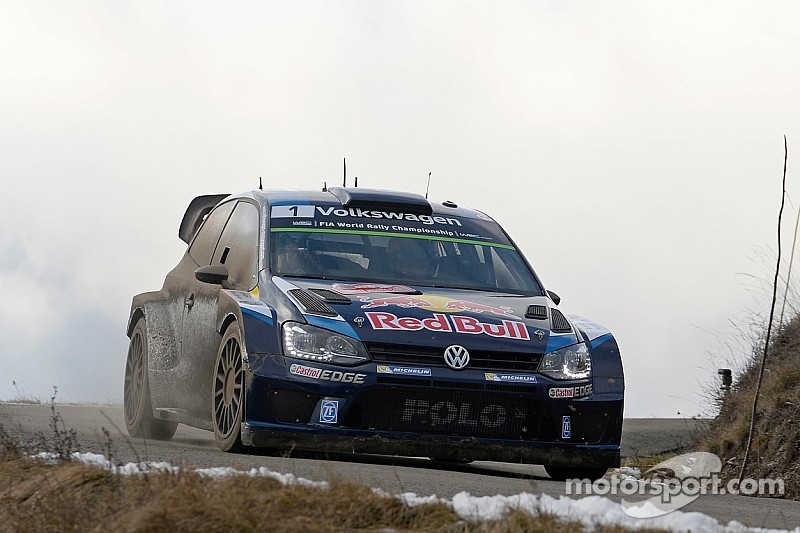 Three doses of pure “Monte” – Volkswagen overcame extremely demanding conditions and a hugely difficult tyre selection to extend its three-car lead at the top of the overall standings at the Rally Monte Carlo. With just the final Sunday of rallying to come, Sébastien Ogier/Julien Ingrassia (F/F) go into the final Sunday of rallying with a 42.8-second lead over Jari-Matti Latvala/Miikka Anttila (FIN/FIN) with Andreas Mikkelsen/Ola Fløene (N/N) a further 1:07.0 minutes back.

The Volkswagen duos erred on the safe side on day three, particularly when it came to the precarious task of selecting the right tyres for the three Polo R WRCs. Given their overnight lead and the ever-changing road conditions, with a mixture of ice, compressed snow, wet and dry asphalt, all three opted for the safest variants for both the morning and the afternoon loops.

I would love to repeat my 2014 ‘Monte’ victory. However, we still have a long way to go before then.

They headed out with four Michelin supersoft slicks and two studded tyres in the morning, which they then replaced with four soft slicks and two winter tyres for the afternoon’s stages. Both options did result in a little lost time compared to the stage winners, but also allowed the Volkswagen duos to extend their lead over the best of the rest to at least 53.0 seconds.

Saturday was a day of classic stages at the Rally Monte Carlo: “Lardier et Valença–Faye”, “Prunières–Embrun” and “Sisteron–Thoard”. The first running of “Prunières–Embrun” had to be cancelled due to the sheer number of spectators on the route.

Quotes after day three of the Rally Monte Carlo

Sébastien Ogier, Volkswagen Polo R WRC #1: “Today’s special stages are basically very nice and great to drive. However, the conditions today were so varied that it made tyre selection difficult. Running on a crossover of slicks, winter tyres or spikes meant we were not able to enjoy the stages as much as we would have done otherwise. We spent the entire day on tyres that were the safest choice. That was definitely the right decision. Tomorrow’s schedule features another three stages, which we will treat with the same respect as today’s. I would love to repeat my 2014 ‘Monte’ victory. However, we still have a long way to go before then.”

Jari-Matti Latvala, Volkswagen Polo R WRC #2: “Another successful day of rallying for us. The conditions were not easy for us today, and the tyre selection was made tricky again by the switching between dry asphalt and icy sections. However, our big advantage meant we were always able to play it safe. As such, we were able to enjoy the stages a bit today. They were great fun. We may have cut Sébastien’s lead by a minute, but we will not be taking any unnecessary risks to try to challenge him. We want to complete the great result and secure the points towards the championship.”

Andreas Mikkelsen, Volkswagen Polo R WRC #9: “The choice to fit the supersoft slicks this morning was definitely not the fastest option. However, it was the safest. My personal goal is to finish the rally. Any place in the top five would be a magnificent result for me. I would obviously like to defend third place again tomorrow, but not at any price. We still have three difficult stages to survive on Sunday. Ola and I will be fully focussed on them. Fortunately we can rely on our fantastic ice spies, who provide us with accurate information on the road conditions before we set off. It is also thanks to them that we are so well placed today.”

Jost Capito, Volkswagen Motorsport Director: “The task facing our drivers today was to face the unique ‘Monte’ conditions, come through in one piece, and select their tyres intelligently. And they passed this test with flying colours. They did not take any unnecessary risks and always erred on the side of safety. Their lead at the start of the day enabled them to employ this tactic, and they actually managed to open up even more of a gap. However, that all counts for nothing if they do not reach the finish in Monaco tomorrow safely. To do this, we will have to produce yet another flawless performance. If we manage that, we are confident we will be left celebrating a great result here at the ‘Monte’.”

... a sudden problem, which had never occurred in all of the 5,000 kilometres of testing with the new Polo R WRC. The Volkswagen mechanics working on the car of Jari-Matti Latvala/Miikka Anttila were faced with a rather unusual task on Friday night. Two pieces of cake – a gift to all the competitors from a local baker after the fifth special stage – had gone missing during Friday’s afternoon loop. The tasty treats were eventually found under the driver’s seat.

And then there were also ...

... a few landmarks. For example, the Polo R WRC completed its 25,000th kilometre against the clock on the tenth stage of the “Monte” on Saturday. During this time, Ogier, Latvala and Mikkelsen have racked up 799 top-three times and 347 stage wins. Sunday’s closing Power Stage (“Col St Jean – St Laurent”) will also mark the 500th special stage for the World Rally Car from Wolfsburg.