A large-scale show for Citroen in Argentina

The city of Córdoba welcomed the Citroën Racing crews on Sunday for an exclusively Citroën show.

Sébastien Loeb/Daniel Elena, Dani Sordo/Carlos del Barrio and Mikko Hirvonen/Jarmo Lehtinen thrilled the huge crowds that had gathered to see them in their DS3 WRCs. 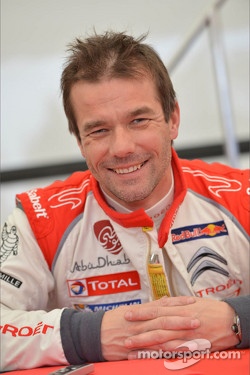 After driving along the dried out La Cañada canal that runs through the heart of the city in his DS3 WRC, Sébastien Loeb was granted the freedom of the city by the mayor, Ramón Mestr.

The party continued in the “Parque de las Tejas”, with a road show combining speed, 360° spins and jumps. Citroën Racing’s drivers took it in turns to wow the crowds in their DS3 WRCs.

Screeching tyres and roaring engines mixed with the noisy cheering and clapping of the fans to create a truly incredible atmosphere. The team then welcomed the charismatic singer and Córdoba-born star Mona Jiménez, who delivered a short performance before hopping into a DS3 WRC for his first ever experience in a racing car. After taking part in a photograph and autograph-signing session, the crews completed a final lap of honour on the roof of production DS3s under a shower of confetti.

“We were very busy all weekend as we also did some promotional work in Buenos Aires”, explained Dani. “Mikko and Jarmo kicked things off at La Bombonera stadium for the partnership between Citroën Argentina and the Boca Juniors football club.

Then we hooked up with them for an event at the Arawak gravel track to the north of the capital. There was a challenge between Seb, Mikko and me and it was really great fun, but I turned our road show into a ‘roll show’!” commented an apologetic Dani. The technical team had their work cut out to ensure the DS3 was ready for the celebration in Córdoba.

“I must admit it’s nice to feel the atmosphere of a rally again, especially here in Argentina where people love their motorsport”, commented a delighted Sébastien. “The activities organised this weekend have given us the chance to meet some of the fans, who gave us a fantastic reception.”

“It’s always a great pleasure to get close to the fans in Argentina,” added Mikko. “They give back as much to us as we put in. We’ll certainly be pulling out all the stops to make sure we don’t let them down at this year’s Rally Argentina.”