The rain-sodden gravel stages in the south of Catalonia presented the competitors with a real challenge on day one of the Rally de Espana. 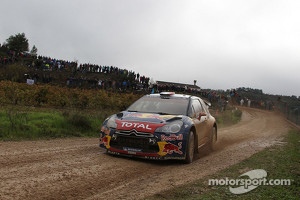 Managing to steer clear of trouble throughout the day, the Citroën Total World Rally Team drivers are well placed to challenge in the rest of the rally.

Sébastien Loeb and Daniel Elena are in second position, 27.2s behind the leader, whilst Mikko Hirvonen and Jarmo Lehtinen lie fourth overall.

Formerly contested exclusively on its famous sweeping circuit-style stages, Rally de Espana has become the only mixed surface event in the World Championship calendar, the first day of the rally being held on gravel roads.

After taking part in the qualifying stage on gravel, the drivers had chosen their position in the running order during the ceremonial start held on Thursday evening in front of Barcelona cathedral.

Banking on the weather staying dry, the crews were all keen to start as far down the running order as possible in order to enjoy a clean racing line.

However, unexpected overnight rainfall put paid to these strategies and raised questions about the best option in terms of tyre choice for the first leg. In the Citroën camp, soft Michelin Latitude Cross tyres were unanimously adopted by the drivers.

On stage one, Sébastien Loeb and Mikko Hirvonen DS3 WRCs featured among the leaders. But SS2 (Pesells) came as something of a cold shower, with the Finn and the Frenchman losing 17 and 25 seconds respectively.

Despite winning Terra Alta, the last stage of the morning, Seb could only manage fourth place, a few seconds behind his team-mate in third. “The conditions were very difficult.

The racing line quickly became rutted and there was a lot of standing water,” explained Mikko. “The car was working well and we had the right tyres, but I think that it would have been difficult to do any better in the situation.”

“When it’s like that, you just can’t push. You have to drive as best you can,” added Sébastien Loeb. “But even if you take it easy, you can still get caught out. We saw quite a few cars that had stopped by the side of the road, which helped us to recognize the trickiest sections…”

After stopping off at the Salou service park, the rally continued with a second run on Pessels (26.59km) and Terra Alta (44.02km). On the first stage, Sébastien lost another 17s. Stung into action, he hit back on the next stage where he was simply unbeatable.

And in claiming the fastest time, he moved up into second position, 25s behind the leader. “I took a lot of risks,” he admitted. “I had a few close shaves, but I had really decided to push in order to avoid falling too far behind.

I managed to do that. I’m now less than half a minute behind, so I think that I still have a chance of winning. A whole new rally starts tomorrow on tarmac!”

Despite winning the short final stage of the day along the seafront at Salou (ES6), Mikko Hirvonen couldn’t hide his disappointment.

Fourth overall, he trailed the leader by over a minute: “I couldn’t find the key to driving fast in these conditions. I tried to push, but I had so many scares that I decided it was better to take it more easily.

There really was no grip, it was really bad. I am going to put all that behind me, because it’s a whole new rally that starts tomorrow. There are still two long days to go and I think I can fight back to finish on the podium!”

The day ended with a long 75-minute service period, which enabled the mechanics to change the cars to their tarmac configuration. After 150km on gravel, there are still 250km of tarmac stages to complete.

Despite making a steady start, Thierry Neuville and Nicolas Gilsoul had to retire on SS2. Like many other crews, the Belgians were caught out by the difficulties of the route.

“I had all four wheels on the road, but the racing line was left rutted by the cars that had gone before and we hit a rock. Part of the front axle broke and then the wheel came off.

I am very disappointed to retire like this, without having really made a mistake,” explained the Citroën Junior World Rally Team driver. The no.8 DS3 WRC will rejoin the rally tomorrow under Rally2 regulations.

Meanwhile, Han Weijs Jr. and Bjorn Degandt lie seventh overall, having so far achieved what they set out to do. “It has been a good day, which has helped me to learn a lot,” confirmed the Dutch driver.

“I had only competed at one gravel rally in wet conditions before, so it was pretty difficult to know when to push. I made a few minor mistakes, but nothing serious. I think it will be a little bit easier tomorrow on tarmac.”