Famed for its mammoth stages, Rally Argentina is a real rally of endurance and the Qatar M-Sport crews had that in mind as they tackled today’s lengthy tests.

Keeping Ford Fiesta RS WRCs well out of trouble in their endeavour to take as many points as possible from the South American event, Evgeny Novikov and Thierry Neuville closed the day in fifth and seventh places respectively.

Elsewhere however, Mads Østberg’s rally swiftly turned from one of endurance to one of hardship as the Norwegian was forced to retire on SS4 after incurring damage to the suspension on his Fiesta RS WRC. 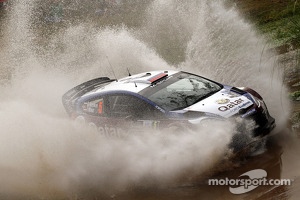 Unaccustomedly for the Scandinavians, Østberg and co-driver Jonas Andersson struggled to challenge the front-runners over the morning pass. Yet keeping the leaders in sight and adapting his driving style to harness the Fiesta’s power on the loose surface, the Norwegian was ready for a resurgent comeback over the afternoon loop. Unfortunately, it was not to be.

Hitting an unsighted rock some 15 kilometres into the second pass of ‘Santa Catalina / La Pampa’ (SS4), the impact damaged the suspension on Østberg’s Fiesta RS WRC. Although putting an untimely end to his day’s rallying, the Norwegian will restart under Rally 2 regulations tomorrow.

For team-mate Novikov, the first full day of competition provided somewhat better fortune as his decision to run first on the road seemed to be working well. Partnered by co-driver Ilka Minor, the Russian was able to carve his own lines through the soft gravel and took advantage of ‘cutting’ without the risk of encountering rocks which are so easily pulled onto the stages from previous runs.

Embarking on the afternoon pass, Novikov’s form only improved. Despite effectively sweeping the road for the leaders, the Muscovite set a promising pace – just six seconds adrift of third-placed Mikko Hirvonen on SS4. Indeed the Russian’s speed was enough to see him leapfrog Andreas Mikkelsen for fifth place on the final test of the day (SS5).

In the Qatar World Rally Team, Neuville and co-driver Nicolas Gilsoul were playing the long game – conserving their speed and taking no unnecessary gambles through the challenging stages.

The Belgian’s tactical approach paid dividends. Gaining experience with each new kilometre, Neuville lies just 17.4 seconds adrift of sixth place going into tomorrow’s competitive action. Well aware of the fact that there is still a long way to go on this event, the youngster is ready and waiting should further drama unfold ahead.

“Running first on the road was OK for me. I took five soft tyres this afternoon and that worked well and also puts us in a better position for later in the rally. When the conditions are a little trickier like they were this afternoon, I really enjoy it. We kept the same rhythm as we did in the morning, but the times were better which was good.

“I’m first of the Fords now which is not so bad. OK, fifth place isn’t where we want to be, but there is a long way to go and as we have seen a lot can still happen. Let’s wait and see.” 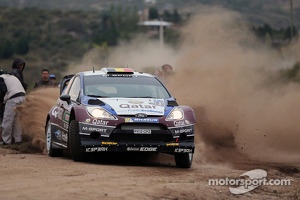 “I’m happy with the day and looking forward to tomorrow. We went with six soft tyres this afternoon – I’m not sure if it was the right choice but in terms of my confidence and the feeling with the car I was happy.

“We’ve already seen a lot happen today and I’m sure a lot can happen tomorrow. There is still a long way to go. I rolled here last year and still finished fifth so I know that a lot is still possible.”

“We went into a right-hand corner and there was a very big stone on the inside of the line – I didn’t even see it, I just hit it in the ‘rut’ and it took the bolt from the steering arm off and that was it. We fixed it on the stage, but we couldn’t repair it properly so we decided to stop and not risk any further damage.

“We had made some changes after service and up until the incident, our pace was really good. I was feeling a lot more confident than I was this morning so it was really disappointing that the day had to end the way it did.

“I think eighth place is definitely possible, but as we have seen today a lot can still happen. Let’s just wait and see what tomorrow brings.”

“It’s not been the best of days for us. Mads [Østberg] was struggling this morning, but we made some changes in service and his pace was looking really good. Unfortunately he damaged the suspension on SS4, but his pace was promising and a lot can still happen.

“Evgeny [Novikov] too was getting quicker and quicker as the day went on. Yes, we had a bad start but things can get better tomorrow when there is no question that we will have all three cars back on the stages. Anything is still possible.”

Loeb on top on second leg of Rally Argentina