Both M-Sport World Rally Team drivers put in a solid performance at the FIA World Rally Championship’s only snow event of the year.

Mikko Hirvonen and Elfyn Evans may be poles apart in terms of Rally Sweden experience, but both M-Sport World Rally Team drivers put in a solid performance at the FIA World Rally Championship’s only snow event of the year. Battling for the podium positions, Hirvonen ultimately had to settle for fourth. Unfortunately for Evans, an untimely off on the final stage cost him what could have been a points-paying ninth place.

Having been in the fight for the top positions, Hirvonen and co-driver Jarmo Lehtinen rejuvenated their relationship with the Ford Fiesta RS WRC. Able to battle with the leaders, the Finn has established a solid base on which to build as the season ensues. 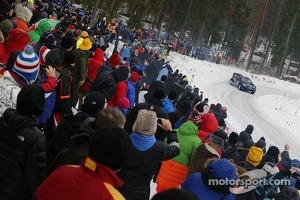 Opting to be safe rather than sorry through the final speed tests, Hirvonen kept well clear of the snow banks which threatened to snare anyone who ventured even slightly off line. Keeping his head, the Finn was not going to be distracted from his objective of finishing the event – securing a strong result and continuing to build momentum for the season ahead.

Evans and co-driver Daniel Barritt came tantalisingly close to achieving their aim of making it through all 24 stages unscathed. Having never contested a full-snow rally with Michelin’s studded tyres, the Welshman made the most of his debut – learning the rally and developing his skills as he went.

Building knowledge and confidence with each stage, Evans’ focussed on seconds per kilometre as opposed to an overall result and it was encouraging to see that his pace improved throughout the weekend – showcasing his speed with the occasional split to challenge the front-runners.

Regrettably, his hard work was to go unrewarded on the final speed test. Sliding wide in the treacherous conditions, his Fiesta RS WRC hit one of the predatory snow banks. With damage to the radiator there was no hope of making it back to service and the Welshman was forced to make an untimely retirement. Regardless of the outcome, Evans has secured a wealth of experience in what were far from ideal Rally Sweden conditions – a fact which sets him up nicely for another new challenge when he crosses the Atlantic for Rally Mexico in three weeks’ time.

Mikko Hirvonen (4th): “It’s been a tough rally, but I think that we did a good job in the end. After the first split, I backed off completely. We had so many moments in those first five kilometres and I understood straight away that if I wanted to fight at the top I would risk not finishing at all, and that wasn’t something I was willing to do this weekend.

“We’re not quite back up to the pace that I was hoping for, but it was not too bad. Some sections were really good so I think that gives us a good base to build on and hopefully when we get back to gravel we can be even faster.”

Elfyn Evans (DNF): “We were achieving what we wanted from the event – improving the pace and on course for what would have been a good result for us – so it is really disappointing that it had to finish the way that it did.

“We were going into a corner that tightened, but unfortunately I didn’t have that marked in the notes. It wasn’t a very high-speed incident by all means, but the back end stepped out and after that there wasn’t a lot we could do to save it. We went off the road and damaged the radiator.

“It is extremely disappointing to end the event like this, but at least we got through the majority of the stages. It was a good event in terms of gaining experience, so now we just need to take that forward and move onto the next one.”

Team Principal, Malcolm Wilson OBE: “It is great to see Mikko [Hirvonen] getting a solid result after the disappointment of Monte-Carlo. It was also good to see his pace getting back to what we are used to seeing from him and the extra point in the Power Stage shows that he still has it in him. He’s got a strong platform to build on now as we head into the gravel events.

“It was a real shame to see Elfyn [Evans] stopped on the final stage. He got caught out on a really fast, tricky section. He may not have finished the rally, but I am pleased that he has completed the majority of the distance. It’s what he needed to do to get the experience for the future and it is all part of his development. It is just a shame that we lost some valuable points.”

Ott Tänak put in a sensational performance on his return to the FIA World Rally Championship. Having last contested the snow-covered stages of Rally Sweden in 2012, the Estonian finished the event in fifth place having challenged the front runner through the early phases and claimed a stage win through the second pass of Kirkenær (SS5). 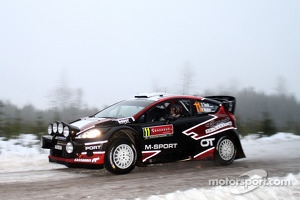 Also making a return to the championship following a year’s hiatus, Henning Solberg was back to his best. Entertaining the crowds throughout the weekend, the Norwegian secured an impressive stage win through SS11 to finish the event in a well-deserved seventh place.

Pontus Tidemand finished what is only his second outing in the Fiesta RS WRC in eighth place. The young Swede struggled to find the optimum set-up for the challenging conditions. But growing in confidence, the youngster was happy with the experience gained and did Sweden proud as the only home driver to take to the wheel of a world rally car.

Ott Tänak (5th): “I don’t think we could have expected anything better. We had a good, clean rally with no problems and after a 12 month break it really was a fantastic result for us. This was like another first event for us and we were getting more and more confident as the rally went on. We were trying lots of different things – driving styles, set-ups – and Raigo [Molder, co-driver] and I really improved our relationship in the car. There were a lot of new things this weekend. We got a lot of good experience and it gives us a really good base to build on.”

Henning Solberg (7th): “I am very, very happy with how this rally has gone. It’s been 12 months since I’ve driven a rally so to be able to challenge the top guys felt really good. And, we set some good times. And, we set a fastest stage time. Not so bad for a man in his 40s! Now, the plan is to go on to do more rallies, that is what I want, so we’ll be looking to try and get the budget together.”

Pontus Tidemand (8th): “It’s been a difficult event with some really tricky conditions but I have to be happy to be here at the end. We’ve learnt a lot and were able to try a lot of different things with the car and the driving. It was good fun and great to see all the Swedish flags out on the stage, I really hope we did them proud.”

M-Sport Managing Director, Malcolm Wilson OBE: “Ott [Tänak] has had a really strong rally. To come back after 12 months away and be challenging with the guys who have so much more recent experience is fantastic and a great way for him to burst back onto the WRC scene. He has at least two more events in a world rally car so I’m really looking forward to seeing what more he can do.

“It’s always a pleasure to have Henning [Solberg] back in the team. He’s also put in an impressive performance with 12 months away from the sport. He’s challenged the best here this weekend, and I just hope that he can get the budget together to do some more rallies with us.

“It’s been a big learning curve for Pontus [Tidemand], He didn’t have the right set-up at the beginning of the rally, but he has learnt a lot in terms of working with the engineers to find the optimum settings. I’m pleased to see that he got his confidence back towards the end and I think that he can be pleased with the job he has done this weekend.”