Russian driver Evgeny Novikov is a surprise overnight leader of the Acropolis Rally after a short but dramatic opening day on the Greek round of the World Rally Championship.

Novikov, who drives for the Qatar M-Sport rally team, brought his Ford Fiesta RS to the overnight parc ferme in Loutraki with a lead of 30.3sec after two rough gravel stages in the countryside west of Athens.

But the shock retirement of championship leader Sebastien Ogier and huge time loss for WRC front-runners Mikko Hirvonen and Mads Ostberg were the main talking points of the day.

All three hit problems on the opening 47km Kineta – Pissia stage, the longest test of the rally.

Ogier’s Polo R was stopped by a fuel pressure problem, while Hirvonen lost almost six minutes when the steering on his Citroen DS3 broke 7km before the finish. Ostberg lost a front wheel from his Ford Fiesta RS and dropped more than three minutes when he stopped to fit the spare.

After the upsets on SS1, the second test - a repeat of the first 26km of the opening stage run in darkness - passed off relatively smoothly. Strong winds prevented any dust-related visibility problems and Novikov extended his rally lead by setting the fastest time.

“No mistakes and everything is good,” Novikov acknowledged at the finish. “I’m happy to be here – it’s looking good for tomorrow.”

Sordo was second-quickest on Friday’s Qualifying Stage and ended the day with a safe run though the pitch dark SS2. “We tried to drive a little bit cleanly but that lost me some time,” the Spaniard explained. “It was a difficult day and I’m happy to be here with no problems.”

Now leading the Volkswagen charge, Latvala was second fastest on SS2 and feeling positive at the wheel of his Polo R after the pre-stage service. “It was good fun in the dark, no problems in the dust and it was enjoyable to drive. The handbrake is sorted and apart from some understeer in places the car is going much better.”

Polo R driver Andreas Mikkelsen is fifth, 23 seconds further back after being distracted on SS2 by a faulty dashboard display that showed only third gear. “It was hard to know what gear I was really in, so a few times I arrived at corners in the wrong gear. I had to try and count the number of changes in my head,” said Mikkelsen.

Ostberg is ninth, 3m 30s off the lead. The Norwegian was sixth fastest on SS2 but admitted his mind was elsewhere. “I couldn’t find the rhythm. I was so, so disappointed after the first stage and it’s difficult to let that go so soon afterwards.”

Hirvonen is a lowly 17th in his Citroen DS3. At the end of SS2, however, the Finn admitted it could have been worse. “I nearly rolled in that one,” he shrugged. 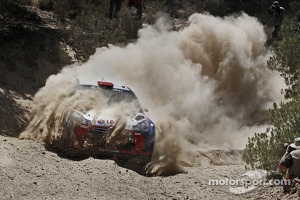 Robert Kubica dominated the opening leg in the WRC 2 category to build a 38.2sec lead in his Citroen DS3 RRC, despite visiting a ditch and a spin.

The Polish F1 star was fastest through the opening 47.70km test from Kineta to Pissia by 20.5sec and won the shorter Kineta test by 13.7sec to return to the rally base in Loutraki clear of Yuriy Protasov and championship leader Abdulaziz Al-Kuwari.

“We set a good pace in the first stage, perhaps too fast,” said Kubica. “We caught the dust of Fuchs ahead and went off into a ditch but, OK, we got out. It was a shame because we lost 30sec in the dust, but this is part of rallying and part of the lessons we are taking.

“The second stage in the dark was pretty difficult. We had a spin. I went off the line and didn’t want to take the risk of trying to get back, so I reversed and lost a lot of time,” added Kubica, who lies 10th overall.

Protasov, driving a Ford Fiesta RRC for the first time, punctured a rear right tyre in SS2 but the Ukrainian is 17.1sec clear of Al-Kuwari’s similar car. The Qatari reported a minor handbrake problem in the opening test.

Valeriy Gorban lies fourth in a Mini John Cooper Works, a further 12.4sec back, with Subhan Aksa completing the top five in another Fiesta RRC.

Peruvian Nicolas Fuchs stopped to change a front left puncture on his Mitsubishi Lancer Evo X in the opening stage and lost more than four minutes. Ricardo Trivino lost more than eight minutes after a similar issue in his Lancer.

Ala’A Rasheed retired his Fiesta RRC in the opening test with a broken steering wheel.

The action on the Acropolis Rally resumes on Saturday morning, when the first of eight stages, the 17km Klenia Mycenae, starts at 0823hrs local time.

Ogier tops Acropolis qualifying, will start 11th on the road