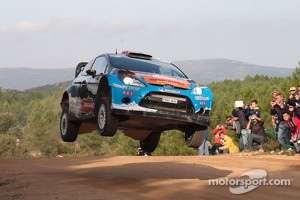 “There has been a lot of ups and downs this weekend, but generally I would say that I am very pleased with the way we have performed. OK, we have had some bad luck, but I am really happy to have been able to fight back up to fourth position.

“I think that we have done a lot of good stages so I am pleased with that. We just have to take the positives from it and see that we are able to win stages and perform on the top level. If everything is working, I think it is possible for us to fight for the victories.

Martin Prokop, Ford Fiesta RS WRC (8th) said: “This rally has been a bit different to the ones before because we were trying to find the limit with the DMACK tyres.

“It was a difficult rally for us and the result was not as good as it could have been. But we have a lot of data and some of the split times were very good.

“For sure it was up and down, but generally I am happy that we are at the finish and have gained a lot of experience for next year. I am just looking forward to the next rally now.”