Abu Dhabi, UAE: Sheikh Khalid Al Qassimi is primed for an extreme test of skill and nerve when he swaps desert sand for frozen snow on his return to World Rally Championship action in Sweden next week.

Ahead of his first in nine scheduled WRC appearances for Abu Dhabi Citroën Total World Rally Team this season, Al Qassimi believes he is starting a new phase in his illustrious career and is ready to climb to the next level as a rally driver. 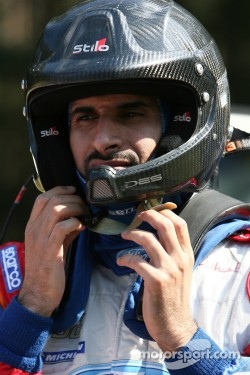 “I feel better than ever and I’m really hungry to get back to the WRC,” he said. “I feel I have unfinished business and I’m returning to the international arena with a point to prove.”

Rally Sweden, second round of the 13-event WRC series, is Al Qassimi’s first WRC outing since Spain’s Rally Catalunya 15 months ago. The UAE star feels genuine excitement ahead of an event which provides a dramatic contrast to conditions he faced during an impressive performance in last weekend’s opening round of the FIA Middle East Rally Championship in Qatar.

“It’s an extreme test, especially after Qatar,” said Al Qassimi. “The two rallies couldn’t be more different. As a rally driver you have to get used to constantly changing environments and terrain. It’s never easy; no two events are the same. Everything varies from rally to rally and every event presents its own challenges.”

Out of action for most of 2012 as he recovered from knee surgery, Al Qassimi led the Qatar field at the halfway stage in his Abu Dhabi Citroën Total World Rally Team DS3 WRC, before a puncture on the second leg forced him to concede victory to Nasser Al Attiyah.

From the rugged desert trails outside Doha and negotiating the ever-present threat of tyre-shredding rocks, Al Qassimi must now make an instant adjustment to tackle the freezing cold and snow and ice-packed Swedish roads - surfaces rarely kind to visitors.

Since Rally Sweden was first held in 1950, the event has boasted only one non-Nordic winner. That driver is nine-time world rally champion Sebastien Loeb, a new Citroën team-mate of Al Qassimi who can now turn to the all-conquering Frenchman for help and advice.

Loeb underlined his mastery of winter rallies with a seventh victory in the recent Monte Carlo Rally for the Citroën Total Abu Dhabi World Rally Team - one of the two WRC team entries created by the new partnership between Abu Dhabi Racing and Citroën Racing.

In Sweden, Loeb teams up with Finland’s Mikko Hirvonen - winner of the event in 2010 and 2011 - and Spain’s Dani Sordo. Al Qassimi, partnered by British co-driver Scott Martin in another DS3 WRC, can’t wait to join the trio during a full day of testing on Sunday.

“Mikko and I were WRC team-mates for four years and I know Sebastien and Dani from events when they were with other teams,” said Al Qassimi, who instigated the UAE capital’s link-up with Citroën as chairman of Abu Dhabi Racing. “We’re now part of the same team and they can definitely help me. We’ll spend a lot of time sharing information based on experience in testing.”

Al Qassimi has no doubt that the experience and expertise of the eight-time WRC manufacturers can help him reach a new peak in his career. “I’m excited by this new partnership,” he said. “Everything feels right about the new car and the new team. I can already feel that it’s a full package that can take Abu Dhabi Racing where we want to go.”

Starting and finishing in Karlstad, Rally Sweden begins next Thursday with a qualifying stage and opening special stage. Another 21 stages follow over the next three days as the route winds to Hagfors and Filipstad, over the Norwegian border, before returning to Sweden via Torsby.

Off to the icy cold: Volkswagen looks ahead to the Rally Sweden