Al Qassimi fights to the finish in Australia

Abu Dhabi, UAE, - Sheikh Khalid Al Qassimi matched his best finish of the season in the World Rally Championship today as a dramatic climax to Rally Australia ensured that the battle for the drivers’ world title will be extended to France next month. 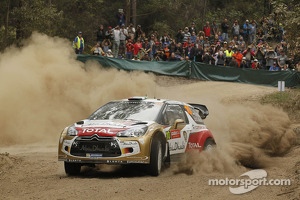 Accompanied by British co-driver Scott Martin in his Abu Dhabi Citroën Total DS3, the UAE driver rounded off a fighting performance in one of the most demanding events of the 2013 WRC series to secure ninth place.

It equalled his finish in Portugal in April and was his third WRC points-scoring performance of the current campaign, and arguably the best.

Neuville’s late promotion meant that rally winner Sebastien Ogier was kept waiting for the WRC drivers’ crown, which he now needs one more point to secure on home territory in Rally De France next month.

The final stage of the day also brought more bitter disappointment for Al Qassimi’s other Citroën team-mate, Northern Ireland’s Kris Meeke, who finished the section but was immediately forced to retire with a broken rear suspension.

Meeke had re-started the event this morning following major repairs to his Abu Dhabi DS3 after he had rolled and lost fourth place the previous day.

Facing the most difficult road conditions by starting first or second on the road throughout, Al Qassimi again coped well over the final leg’s six stages, with only Meeke starting ahead of him.

“Starting in first or second position on the road didn’t make my job any easier, especially on the first loop of stages where there was always a lot of loose dirt,” he said. “I tried different driving styles and we worked on the set-up, and in the end it was good to finish where I did.”