Abu Dhabi, UAE - The UAE’s Sheikh Khalid Al Qassimi has shrugged off an injury scare and is hoping for kind weather as he prepares for one of the most difficult examinations of his World Rally Championship career in Germany. 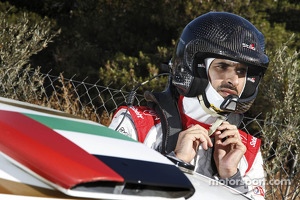 The Emirati driver returns to the WRC stage after a two-month gap for his first tarmac rally in almost two years, and is ready for a stern test alongside Scott Martin at the wheel of his Abu Dhabi Citroën Total DS3 in Rallye Deutschland starting on Thursday.

The WRC cars have all undergone dramatic changes to wheels, brakes and suspension for the transition from gravel to asphalt for the first time this season.

This has meant a big adjustment for Al Qassimi, who hurt his left hand in an accident at home last week, but was much happier following a test session over 220-km of gravel roads on Sunday and after completing half of his recce of the route yesterday.

“I’m trying to find my rhythm and to get to understand the car,” he said. “It’s the first time I’ve driven it on tarmac so everything’s completely new and different.

“We’ve tried a few set-ups and at the moment it all feels good to me. My hand is still a bit sore but I’ll manage. The problems start if the weather changes. We had rain during the test on Sunday and when that happens everything changes.

“I’m hoping for dry weather during the rally, but if we have rain I’ll just have to handle it. This is a very fast rally and the surface changes from one section to another. In wet conditions it’s even more challenging.”

Meanwhile, the pairings of Mikko Hirvonen and Jarmo Lehtinen, and Dani Sordo and Carlos del Barrio, face a daunting task in their Citroën Total Abu Dhabi DS3s as they attempt to extend the manufacturer’s incredible winning record in Germany.

Since Rallye Deutschland was added to the WRC calendar in 2002, Citroën has enjoyed 11 consecutive wins, and Hirvonen and Sordo need a big result this weekend to eat into Volkswagen’s 55-point lead in the manufacturers’ championship.

The three Abu Dhabi Citroën DS3s get their first taste of action in tomorrow (Wednesday) afternoon’s shakedown, before a ceremonial start in the centre of Cologne on Thursday leads to the first two special stages. On Friday, Saturday and Sunday, the rally revolves around Trier, with 14 more stages winding through the Mosel vineyards.