The UAE’s Sheikh Khalid bin Faisal Al Qassimi is hoping the new-look Citroën Total Abu Dhabi World Rally Team can make a powerful start to the 2014 FIA World Rally Championship in Monte Carlo this weekend as they bid to mount a strong challenge for the manufacturers’ crown. 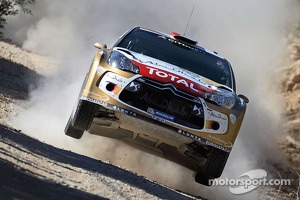 Al Qassimi, who will compete in four selected WRC events this season starting in Sweden next month, is attending the legendary Monte Carlo Rally to support the team and its new driver pairing of Northern Ireland’s Kris Meeke and Norway’s MadsØstberg.

As chairman of Abu Dhabi Racing, Al Qassimi initiated the sponsorship agreement with eight-times WRC manufacturers champions Citroën Racing which is entering its second year, and he believes Meeke and Ostberg can prove to be a strong combination.

“Although I will not be taking part in the opening round, we at Abu Dhabi Racing were very keen to attend Rallye Monte Carlo and show our support to Citroën Total Abu Dhabi WRT in this iconic event,” he said.

“The new season will be extremely tough, with a very high level of competition, but this team has won the FIA WRC manufacturers’ championship eight times and will be looking to gain as many points as possible and make a strong challenge for the title.”

“I’m looking forward to the new season, and I’m giving my best wishes and support to Kris and Mads. They will need time to adjust and settle in as new members of the team, as I did last season, but that doesn’t mean that they will not be fighting for rally victories.”

A first loop of three stages run twice in the Haute Alpes region is followed on Friday by a leg featuring classic Monte Carlo stages of 49.25km and 36.70km. That night, the competitors head south to Monaco for Saturday’s final leg comprising two loops of two stages in the hinterland of Nice - one by day and the other by night. The rally ends on Sunday with the traditional awards ceremony in the square of the Prince's Palace in Monaco.

Al Qassimi, who will this season be partnered by Northern Irish co-driver Chris Patterson, begins his own WRC programme in Rally Sweden (5-8 May), followed by the rounds in Portugal (3-6 April), Italy (6-8 June) and Spain (24-26 October).

Al Qassimi and Patterson will also spearhead a six-car challenge by Abu Dhabi Racing in the 2014 FIA Middle East Rally Championship, which gets under way in Qatar from 20-22 February. Details to be announced soon.

Citroën Racing opens its season at the Rallye Monte-Carlo