Al Qassimi shrugs off early setback to fight on in Germany

After a morning rain shower added to the notoriously difficult nature of the tarmac route in Germany, Al Qassimi broke a rear left wheel when his Abu Dhabi Citroën Total DS3 clipped a kerb on the first of the second leg’s six special stages. 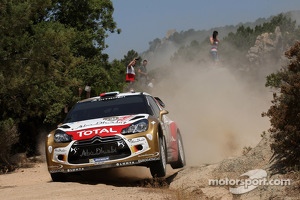 While the UAE driver lost time, over the following two stages he managed to climb one place from his overnight position to hold 13th place, making a top ten finish still within his sights with another 11 stages remaining before the finish on Sunday.

On the same stage, Sebastien Ogier’s hopes of clinching his maiden world championship title in the ninth round of the WRC series were ruined when he went off the road and damaged his Volkswagen’s front left suspension, forcing his retirement for the day.

For Al Qassimi, this is arguably his toughest WRC event of the season. It is his first tarmac rally for almost two years and his first asphalt event at the wheel of the Abu Dhabi Citroën, while his preparations were not helped by an injured left hand following a fall at home last week. After Thursday’s ceremonial start beside Cologne’s city centre cathedral, the Emirati driver was determined not to take any risks over the two stages that followed, the second of these being run in darkness.

He completed the first leg to say: “It wasn’t easy to get to grips with the car on such slippery roads. I had a bit of a scare right at the start of the first stage and that didn’t help boost my confidence, but I’ll look to build that over the next couple of days.”

With an estimated 200,000 spectators following the event, it was proving an exhilarating experience for young UAE driver Mohammed Al Mutawaa, who is making his WRC debut alongside Stephen McAuley in an Abu Dhabi Citroën DS3 R3 2WD.

Al Mutawaa, given his chance in rallying by Abu Dhabi Racing following a selection event in the UAE capital last November, is gaining invaluable experience during his first ever tarmac event, and after the two states today was lying 33rd overall after starting 64th out of 76 cars.