Another podium finish for Hirvonen on the Rally de Portugal

Any driver was about to take the final leg of Rally de Portugal lightly.

Consistent throughout the final leg of Rally de Portugal, Mikko Hirvonen and Jarmo Lehtinen finished as runners-up at the fourth round of the FIA World Rally Championship. After rejoining under Rally2 rules, Dani Sordo and Carlos del Barrio scored two additional points for the Citroën Total Abu Dhabi World Rally Team in the manufacturers’ standings.

Although there were clear gaps between the leading drivers, no-one was about to take the final leg of Rally de Portugal lightly. The day’s schedule still included two loops comprised of the Silves (21.52km) and Almodovar (52.30km) stages. 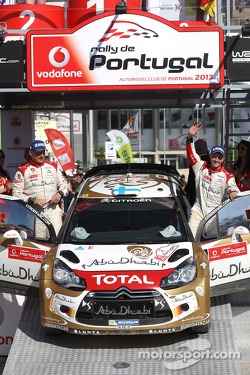 And, as the 2013 regulations restrict the quotas of tyres allocated to each car, the crews had to manage their tyres as effectively as they could so as to make it to the end of the rally in the best possible conditions.

Third overall on Saturday evening, Mikko Hirvonen set off this morning aiming to hold onto his position. However, looking at the split times on Silves 1 (SS12), the Finn noted that Ogier and Latvala were losing quite a lot of time.

“I even wondered if there was something wrong with the timing system,” exclaimed the Finn, who moved up into second place after the stage. “This rally is very hard on the cars and my DS3 WRC has been perfect in that respect. I am going to keep driving without taking any risks, so that I finish in this position. I’m not particularly worried about the tyres because I have managed my quota pretty well since the start of the rally.”

Indeed, there were no mishaps in the closing stages for the Finn, who finished as runner-up once again. “Second place is always a good result, but I must say that I hoped to be a bit quicker here,” admitted the Citroën Total Abu Dhabi WRT driver.

“We have made good progress since Mexico, but we needed a bit more time on the road to optimise the suspension settings and perhaps that’s what prevented me from being on the pace on Friday morning. We need to keep working, especially to improve the performance in the fastest sections.”

After rejoining under Rally2 rules, Dani Sordo’s sole aim was to make it to the end of the rally and claim a couple of extra points towards the Manufacturers’ World Championship. The Spaniard finished ninth among the works drivers.

“Most of all, I’ll take heart from how I started the rally, because the feeling I had in the car was better than ever before”, he explained. “The other thing I learned was that you really need to perform well in qualifying to give yourself the best possible chance of victory. I’ll head for Argentina even more motivated than before and determined to show everyone what I can do.”

Khalid Al Qassimi completed an error-free rally to finish in the points, and he too felt hopeful for the future. “I’m happy to have made it to the end of this rally. But above all, I’m pleased to have made progress with my driving style on the last few stages,” stated the driver of the Abu Dhabi Citroën Total WRT’s DS3 WRC.

“As the tyres were tending to heat up, I eased off a little and realised that this approach was a lot more effective. This is another step forward on my learning curve.”

The final word went to Yves Matton, Citroën Racing Team Principal, who congratulated the work done by the team since Rally Mexico: “We have not only shown that our car is still the most reliable in the field, but we have also managed to improve its performance level whilst adapting it to the style of our drivers. We’re pleased about this and it means that we can feel look forward to the rest of the season in a positive frame of mind.”

A very positive first outing on gravel for Kubica in Portugal