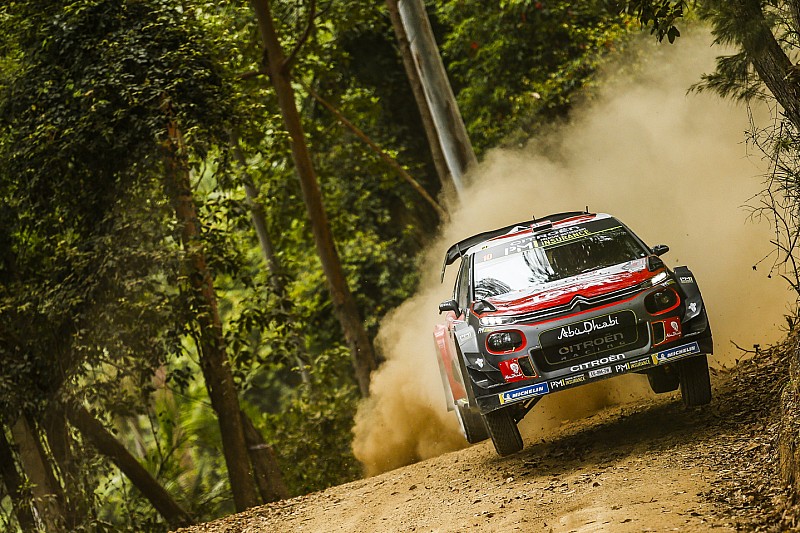 The returning Mads Ostberg leads Rally Australia after the opening stages, while Ott Tanak heads Thierry Neuville and Sebastien Ogier in the fight for the World Rally Championship title.

Ostberg was forced to sit out of the previous round in Spain to make way for rally winner Sebastien Loeb as he made his final of three appearances for Citroen.

But C3 WRC driver Ostberg benefitted from a low running order, which defined the legs, to take a 5.4-second advantage over Esapekka Lappi from the first three stages of the season finale.

Points leader Ogier was first onto the gravel routes and could only manage 10th overall, 8.4s behind nearest rival Neuville – who sits just three points adrift of the defending champion at the top of the standings.

Ogier said: “[The road order is] the worse, we knew it before. I guessed this one was going to be hard.”

Although Neuville complained of a difficult morning, he had the advantage of following Ogier’s wide lines and capitalised with a more efficient run.

To keep his title hopes alive, Tanak needs to win the rally and the powerstage with Ogier and Neuville finishing seventh or lower and fifth or lower, respectively.

The Toyota driver survived a scare when he picked up a rear-left puncture late on during SS3 when he hit a “shit” man-made jump after which he clipped a bank. He still held on to set the fourth fastest time and lines up sixth overall.

Ostberg’s nearest challenger is Lappi, who makes his final appearance for Toyota ahead of a move to Citroen.

After a torrid showing in Spain, Lappi again felt he had more to give despite being fastest across the first two stages.

He said: “To be honest, it didn’t feel so good. It’s so wide that I was too cautious and I felt that I had a lot of room at every corner. In the end, I was on the clean line so maybe it was a good compromise. There’s a lot of margin for sure so maybe I can go much faster.”

Yaris WRC teammate Latvala is a further 0.4s behind in third, as Toyota look to wrap up the manufacturers’ championship over Hyundai.

Craig Breen recovered from a brush with the local wildlife and a suspected cracked brake disc to finish in fourth ahead of Hayden Paddon.

On the day’s opening stage, Breen report that he "hit a fucking kangaroo. Poor Skippy, he’s gone. It was a baby one.”

Behind Tanak is M-Sport duo Teemu Suninen and Elfyn Evans.

Hyundai’s Andreas Mikkelsen was an unfortunate casualty of the opening stages. He emerged out of a chicane to find a tractor on the route. Moments later he span backwards off the road into a ditch and was unable to continue.