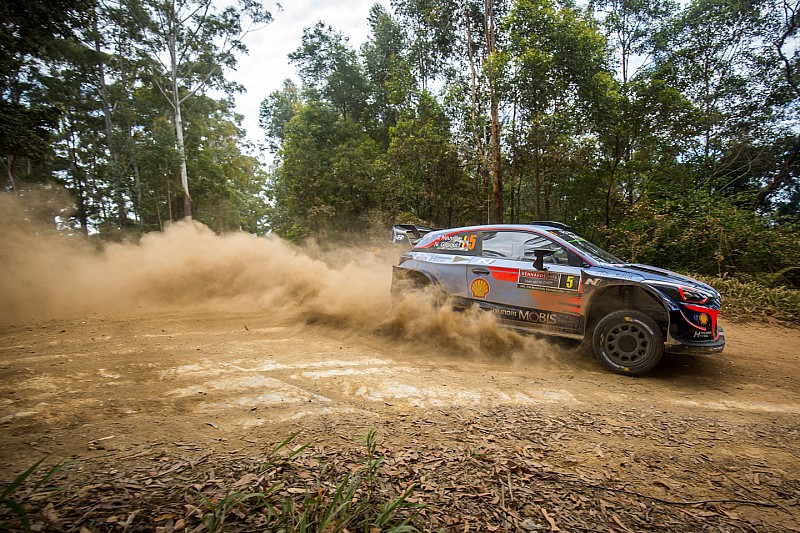 Mads Ostberg continues to lead Rally Australia after Friday's afternoon loop, while a run-in with a hay bale and a puncture have battered Thierry Neuville's WRC title hopes.

Citroen driver Ostberg continued to benefit from running last in the order, emerging from the repeat of this morning's stages with a 6.2s lead over Jari-Matti Latvala and Craig Breen, who topped the final forest stage of the day.

Neuville, meanwhile, has a lot of work to do to get his title bid back on track, the Hyundai driver set to sweep the road tomorrow after ending the loop well over a minute off the pace thanks to dramas on SS6.

The loop started out as a see-sawing battle between Ogier and Neuville, the Frenchman using a slightly softer tyre mix to pull a second back on his Hyundai rival on the first stage.

Neuville then hit back by going 1.6s faster on the Coldwater stage, the Belgian fastest overall as he moved into seventh.

But the final test proved costly for Neuville, the Belgian losing 21s when he ran into a chicane, before finishing the stage with a left-rear puncture and significant bodywork damage after an awkward landing from a jump.

As a result he was 40s slower than Ogier on the stage, and will suffer in terms of road order tomorrow thanks to sitting 10th in the overall standings with a 1m12s deficit to Ostberg.

Ogier, meanwhile, finished the loop seventh after M-Sport teammates Elfyn Evans and Teemu Suninen both slowed at the end of SS6 to drop behind the Frenchman in a bid to improve his running order for tomorrow, having swept the road all day today.

"I push like crazy, this was worse than this morning," said Ogier. "I was on the limit, including on the jump."

Like in the morning loop, Ott Tanak was the best of the title contenders – despite dealing with a significantly damaged Yaris.

Tanak's afternoon started in promising fashion, the title outsider topping the second pass through Orara East despite clipping a fence post with the rear if his car early in the test.

The Yaris was then left without a front bar after Tanak hit the water splash in SS5 too hard, leaving the car "running like a dog" for the 26-kilometre Sherwood pass.

However he was still quicker than Ogier through the stage, and currently sits fifth overall, behind Hayden Paddon's Hyundai.

Toyota teammate Esapekka Lappi had dramas at the same creek as Tanak, his Yaris rolling to a stop after its engine ingested a significant amount of water.

He managed to get going again, but dropped 22s on the stage and fell from second in the overall standings to sixth.

Suninen and Evans are eighth and ninth after sacrificing their rallies to help Ogier.