Abu Dhabi, UAE - The UAE’s Sheikh Khalid Al Qassimi overcame the toughest conditions Rally Australia could place in his path today to stay within reach of his best performance of the season in the World Rally Championship. 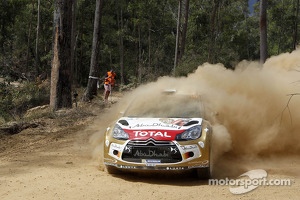 Partnered by British co-driver Scott Martin in his Abu Dhabi Citroën Total DS3, the Emirati driver came through another difficult leg after starting first on the treacherous gravel stages, rising to ninth place on completion of four demanding special stages.

While he was 64.9 seconds behind Australian Nathan Quinn, with another six testing stages remaining on tomorrow’s (Sunday) final leg Al Qassimi could yet improve on his ninth place finish in Portugal in April. The precarious nature of the event was highlighted when Northern Ireland’s Kris Meeke rolled and went out of the rally on the third stage of the day while holding fourth place in his Citroën Abu Dhabi DS3. Both Meeke and co-driver Chris Patterson were unhurt.

It was another particularly challenging day for Al Qassimi who started first on the road, having to contend with the worst of the loose gravel gradually swept off the track, creating a smoother passage for the cars running later on the stages.

This factor was most evident on the day’s 49.9km opening stage, a largely fast and flowing section with big corners, crests and jumps, along with small sections of asphalt dotted along the route.

“That was very difficult, with a lot of loose gravel, and we had five or six anxious moments,” said Al Qassimi. “The next stage (14.84km) had some nice sections but was also tricky. You needed to predict where the bumps will come.”

With the two stages both being run twice either side of a lunch time service halt, Al Qassimi bettered his aggregate time by 1 min 35 secs on the second loop before the rally took another break ahead of two evening runs of the 1.6km super special spectator stage in Coffs Harbour. The rally finishes there tomorrow (Sunday) afternoon.

Six of the best for Ogier on Saturday in Rally Australia