Cautious Oliveira in a treacherous opening stage in Greece 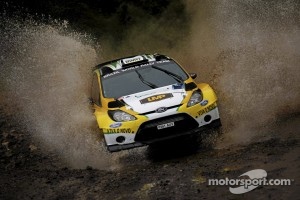 The BWRT Brazilian driver Daniel Oliveira and his Portuguese navigator Carlos Magalhaes made their way through a short but tough first day of action in the Acropolis Rally of Greece, sixth round of the FIA World Rally Championship.

Oliveira had to cope with different road conditions in his Ford Fiesta RS WRC serviced by the Stohl Racing team. He set a cautious pace in the 25.24km Kineta special stage which enabled him to clear the section without problems, although he had to take out the best from him to keep the car on the road.

"It was an extremely difficult stage; there were very fast sections and some others very twisty. The asphalt portion was very slippery. It was very difficult at the beginning. I tried to do my best", said Daniel after he completed the stage which also featured some asphalt sections. "My target is to finish but we will see first the special stages first. We need to see how hard it's going to be for the car. For sure today was a tough opening", he added.

This morning Oliveira and Magalhaes completed the qualifying stage near the base of the event in Loutraki setting the 11th fastest time. This enabled them to choose the 3rd slot in the starting order for today and tomorrow's stages. There was a bit of rain in Loutraki this morning and tomorrow slight rains are forecasted in the remote service zone in Itea.

Then there was an 80-kilometre liaison trip from Loutraki to the capital Athens, where the ceremonial start took place, just in front of the well-known Zappion. Immediately after this, the drivers headed to the East to tackle the first stage, which was on the way back to the base of the event.

Tomorrow's route. On Friday, Oliveira will have the opportunity to visit some of the most classic stages in Greece used for the last time back in 2008, like "Bauxites" and "Drossohori". The action starts very early in the morning at 06:53.

There are five stages scheduled for tomorrow, with a single run through two of them: the first stage Aghia Marina and the Drossohori stage. The first three stages are on the way to the first remote service in Itea. The next tw o stages will take place around the city, before another stop in the remote service. Finally, there are three other stages remaining on the way back to Loutraki.

It is the longest day of the event with 169.12 competitive kilometres and 537km of liaison.