For the first time in the World Rally Championship history a Brazilian team scored manufacturer points thanks that Daniel Oliveira was able to complete the last day of action in the Rally of Italy.

At the wheel of his MINI John Cooper Works WRC the young Brazilian driver guided the Brazil World Rally Team to its first satisfaction on the third appearance of the season after the team broke into the international rally arena this year.

It was real good feeling; however, this won’t be the only gratifying moment for the South American squad. The bid of the BWRT in the WRC is long term and one of the main objectives behind this project is to help rallying to lift-off in Brazil.

Actually, rally is nothing new in the country. One of the biggest territories and economies of the world. Brazil has a chapter within the WRC history in the early eighties when Brazil hosted two WRC events. 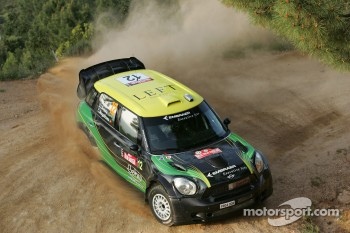 In 1981 the Rallye do Brasil was part of a unique long-haul adventure that crossed the Atlantic Ocean to dispute two consecutive rounds in South America. The first stop was in July in Argentina for the third edition of the so-called Rally Codasur, and immediately after it was the time for neighbouring Brazil.

That first edition was won by Ari Vatanen driving a Rothmans Rally Team Ford Escort RS1800. The Finish driver defeated Guy Frequelin who had claimed the victory two weeks before in the first continental showdown.

The year after Brazil was scheduled again within the WRC’s calendar, although this time had the privilege of being the only South American round since Argentina was enduring a war with Great Britain for the sovereignty of the Falkland´s Islands. In that edition, Michelle Mouton on board, an Audi Quattro, beat the Opel Ascona of Walter Rohl.

M-Sport Heads To The Rally Show