Oliveira had a great weekend in Portugal 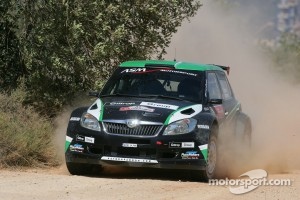 The BWRT driver scored his first Manufacturer's points of the 2012 season.

The Rally de Portugal, fourth round of the WRC, concluded after 4 demanding and intense days of competition where Daniel Oliveira along his co-driver Carlos Magalhaes finished 13th overall.

On board his Ford Fiesta RS Oliveira finished 434,77 kms of competition in very tricky roads (rain, fog, and mud), and the audience did not stop cheering drivers while cars were running. Back in Portuguese roads, the driver from el Salvador - Bahia had the aim of finishing the race.

Great job for the Stohl Racing Team: During the first experience with the Team from Austria which is led by the experienced Manfred Stohl, Oliveira did great performance and this motivated him for the next world rally challenge to be held in C ordoba, Argentina. Dani knows most of those roads and he feels as if he was a local driver.

First points of the year: In his first performance in Portugal, Dani Oliveira could remain in the zone for points and this way he started the championship by scoring some of them.