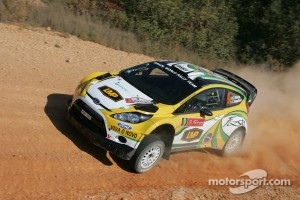 Activities of this FIA World Rally Championship's fourth round began quite early with a series of promotional events prior to the Lisbon's Super Special stage with which Rally de Portugal finally started out during the afternoon. "It was nice to get together with most of the people with which I spent many days last year and experienced the spectacular atmosphere of the W RC" expressed the 26 year-old Brazilian driver.

Oliveira and his co-driver Carlos Magalhaes were 19th fastest through a tricky 3.27km street test tackled in gravel wheels. "It was a nice way to start this rally since there were tons of fans on the streets and I had a first good feeling with the car" said Daniel.

They didn't have much time to enjoy the cheering of the crow as they hit back the road soon again to drive more than 200km to face afterwards three real speed gravel stages run in the dark on their way back to the Service Park at Algarve Stadium.

The first special stage of this new section started at 8 pm and visibility was quite an issue of discussion during the whole week. The thr ee-minute gap between each car on the road ensured dust didn't affect the drivers running in the dark; however, road conditions were very difficult as it started to rain quite heavily during late afternoon "We ran in very difficult and slippery conditions" explained Oliveira.

Daniel set a cautious but steady pace which paid him off since the Brazilian took advantage some of the rival's problems to climb three positions and finished 16th overall. "Today we did something of what we came to do here" stated Daniel. "We didn't take any risks and ran wisely through these stages. The objective was to finish the day and tomorrow we will try to improve our pace tomorrow".

Tomorrow's route. Although this is the first event Daniel and Carlos are repeating since they star ted competing within the World Rally Championship last year, tomorrow's route will be a completely new challenge for BWRT crew members.

After a slightly delayed start owing to the late finish tonight (the first stage of the day starts at midday), competitors will head to Tavira, -a popular touristic resort 30km to the East of Faro- for the first time since 2007, for three repeated stages.