Oliveira gets around the second day of Rally de Portugal 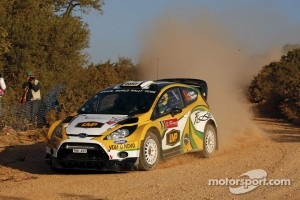 It was a complicated day for many WRC drivers due to adverse weather conditions.

A constant rain, fog, and a slippery surface were the extra ingredients of the second day of the competition of Rally de Portugal, fourth round of the World Rally Championship. Early today many drivers had to cope with the same conditions, among them it was Daniel Oliveira with his Ford Fiesta WRC for the Brazil World Rally Team which counts on the Stohl Racing.

Oliveira started the day full of expectations and after completing two difficult Super Specials (SS5 and SS6) he kept a firm pace with the aim of completing the day. After running these Super Specials in the laison he was stuck with no chances of going back to the road. Some other drivers were involved in the same situation which blocked the road.

This situation forced the organizers to neutralize the second loop because of the chaos they caused. In the end, Daniel could go back to the Service Park on his own where the team worked hard so that the car would be ready for tomorrow. After this mishap, the Brazilian driver did not get any penalties and he could finish the day in the 12th position overall. After two days of competition, the leader of Rally de Portugal 2012 is the Finnish Mikko Hirvonnen (Citroen), with 1:20.01,7.

Tomorrow's Leg: The third day of the competition will move to the No rth of the Faro. There will be three Super Specials that will be repeated twice. This is the longest leg of the race with 148.16 kilometers.