Oliveira is going after his first points of the season 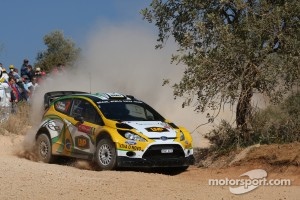 The BWRT Brazilian driver, who drives a Ford Fiesta WRC, has concluded the third day in Rally de Portugal, fourth round of the FIA World Rally championship.

Oliveira did a good performance on board his car all along the six specials ran today. It rained last night so the roads were muddy and this was something to keep in mind during the race.

During the first boucle of the morning Daniel did not feel confortable with the tires they chose (soft components) but after the Service Park his team could change the situation since they used harder components that were more competitive. There was only one problem reported in the second stage this afternoon which was related to the suspension.

He kept on driving even though he had damaged front shock absorber but then he hit a rock in the middle o f the road. This inconvenient affected his time, speciallly in today's last stage.

All these issues were solved by the Stohl Racing in the last Service Park of 45 minutes which left the car in good conditions for the last day of the competition. Tomorrow's aim is to keep on going and finish a new edition of Rally de Portugal where he is holding 14th overall.

Up to now, the Brazil World Rally Team is in the zone where points can be score for the Manufacturers and they are hoping to achieve them by tomorrow in his first rally of the 2012 season.

Tomorrow, the last day. The Portuguese competition has still six more stages to be run, which mean 115,08 kilometers. The race will start at 06:55 from the Algarve stadium.