The Brazilian driver bounced back from last night's incident and made up for the lost time. He climbed up to the 14th position and is 8th within the Manufacturers. 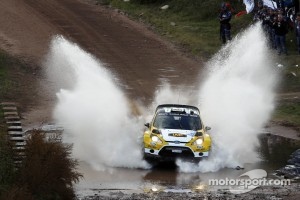 BWRT crew members, Daniel Oliveira and Carlos Magalhaes. completed one of their best legs ever in the WRC after climbing up 11 positions on their way through an extremely long first day in Rally Argentina, fifth round of the 2012 FIA World Rally Championship.

Last night, they got a 10-minute time penalty for not completing the Super Special stage. Today, Oliveira and Magalhaes showed great improvements in their pace on board the Ford Fiesta RS WRC serviced by Sthol Racing.

"It was a very nice day, I need it to forget yesterday's mistake. I have learned you have to run sensible in order to complete these kinds of stages. It was really tough and being fully concentrated helped me a lot" expressed Daniel, who was rallying all day long.

Oliveira started the day with a 11th fastest time through the 37,51-kilometre La Pampa-La Pampa opening stage. He repeated a good performance on SS3 Ascochinga / Agua De Oro 1 (51,88km), the longest stage of the day and the second in length of the rally, where he was 12th fastest. "It was a good start, although we took care of the car so we could not push too much. It rained a bit d uring the morning and conditions were tricky" said the 26-year old driver

For the second run through the same stages, after visiting the Service Park, Oliveira built up his pace and improved considerably his times in regard to the first passes. He set 9th and 8th fastest time through La Pampa-LaPampa and Ascochinga/Agua de Oro and gained nine positions before the last speed test.

"We started the night stage with a fast pace but I realised that there was no sense in taking unnecessary risks, so we slowed down a bit. The rally is too long. Tomorrow we will tackle stages I already know and like. I hope to continue with the same strategy" concluded Oliveira.

The route. Tomorrow the action will take place in the South of the base in Carlos Paz with drivers tackling the typical fast roads of the Calamuchita Valley. The day consists of two loops of three stages each with a visit to the Service Park after each section, and a final run through the Super Special Amarok. Day 2 has two well-known stages like San Agustin-Santa Rosa (20.18km) and Amboy-Santa Mónica (20.33km), whereas a new long 39.74km section from Intiyaco to Golpe de Agua was included this year.