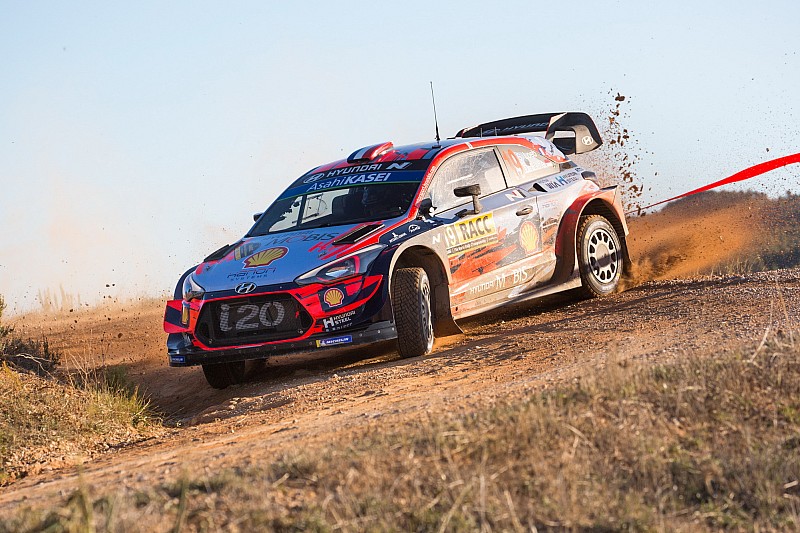 Sebastien Loeb has launched himself into the lead of Rally Spain, sealing a Hyundai 1-2-3 ahead of Thierry Neuville and Dani Sordo.

But as things stand Tanak, who will switch to Hyundai next season, is provisionally set to clinch his first WRC title on Sunday subject to powerstage points.

Loeb was a man on a mission, jumping up from sixth to fourth on stage four before overhauling Tanak into third with a stage win on Horta-Bot.

With a "perfect" car, Loeb "tried very hard" and destroyed his competition on La Fatarella-Vilalba by 8.9s to fly into the lead. He is 1.7s ahead of Neuville ahead of Saturday's Tarmac stages.

Sordo and Neuville began Friday afternoon separated by just one second in first and second, but Sordo quickly found an edge and grabbed 3.2s from his teammate on Gandesa to establish a 4.2s lead.

Another 0.4s were eked out over Neuville on Horta-Bot but he struggled on La Fatarella-Vilalba. A confused Sordo lost 10.5s to Neuville to trail by 5.9s in third.

Kris Meeke and Elfyn Evans had been embroiled in a squabble all day, 0.3s apart prior to the afternoon loop.

The pair matched each other on Gandesa before Evans surrendered 1.8s and the position on the stage five, not quite happy with the handling of his M-Sport Fiesta. But it got worse for Evans on La Fatarella-Vilalba and he lost 29.5s to Meeke with a sick sounding engine.

Meeke meanwhile was impeccable on the 24-mile test and vaulted into fourth position ahead of teammate Tanak, 5.4s shy of the podium. Evans fell behind a rejuvenated Latvala to seventh who felt he was "back on the map" after struggling for confidence on Friday morning.

La Fatarella-Vilalba was a tricky stage for M-Sport. Teemu Suninen was in the mood and setting strong times throughout the afternoon but gave up 23.5s to Meeke on Friday's final stage to lie eighth, 7.8s behind teammate Evans overnight.

Sebastien Ogier lost over three minutes with hydraulic problems aboard his Citroen C3 WRC in the morning, seemingly leaving his title hopes in tatters.

Wrestling his Citroen through two stages with no power steering left blisters on his hands, and a mistake on Gandesa where he got crossed up and overshot a hairpin compounded his troubles. Ogier confessed to having no motivation as he languished well outside the top 10 places.

Citroen's weekend got worse when Esapekka Lappi retired from seventh place with a technical problem on the second stage of the loop, Horta-Bot. Lappi's demise promoted Takamoto Katsuta up to ninth, while Citroen could find some solace in Mads Ostberg leading the WRC2 category in 10th.

Tonight the cars will be converted from gravel to Tarmac specification for Saturday and Sunday's legs on asphalt.

Tanak to leave Toyota for Hyundai in shock 2020 move