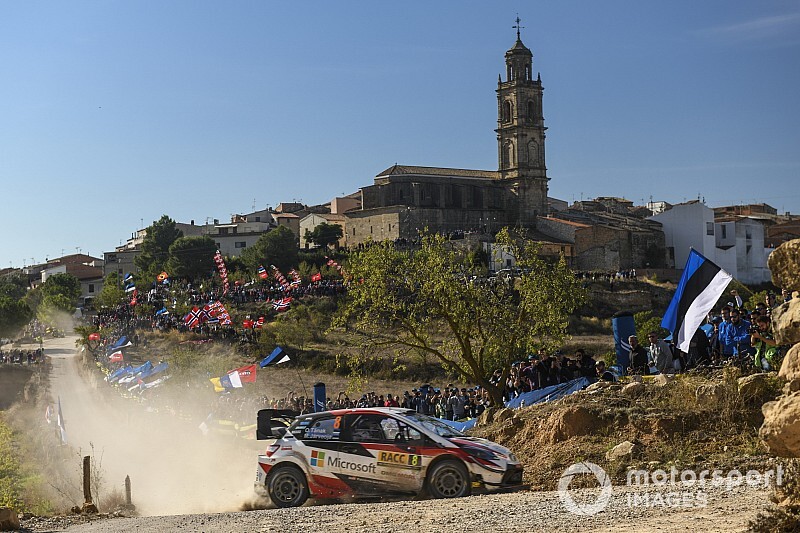 Hyundai’s Thierry Neuville heads the Rally of Spain by 21.5 seconds, but WRC points leader Ott Tanak has surged into the top three in place of Sebastien Loeb.

Yet Tanak had won the first pass of El Montmell that concluded the morning and picked up where he left off with a quickest time on Savalla 2.

Further stage wins on the repeat passes of Querol and El Montmell allowed Tanak to chew into his deficit to Sordo, who said he “couldn’t do better".

Loeb was under pressure too having shipped 4.3s to rally leader Neuville as he fell back into the clutches of the Sordo and Tanak scrap behind.

Like Sordo, Loeb felt he was at his maximum but just couldn’t keep with Tanak. The nine-time champion’s time loss was more severe than Sordo’s, and he fell behind his teammate on El Montmell with just a 1.4s buffer over Tanak heading to the short Salou street stage.

Sordo resisted the Tanak pressure on Salou to lie three seconds ahead overnight in second, but Loeb would lose his grip on a podium place, surrendering two seconds on Salou to trail the Estonian by 0.6s in fourth.

Neuville couldn’t quite match Tanak’s searing stage-winning pace either but managed to almost double his lead across the loop with a stage win on Salou to boot.

As it stands, Sunday’s Power Stage will determine whether the title is won this weekend, as Neuville is currently set to score 10 more points than Tanak and needing to score 12 more to keep the championship battle alive.

Toyota’s Jari-Matti Latvala had looked under threat from M-Sport’s Elfyn Evans briefly on Saturday morning, but Latvala continued to outpace Evans and is now 22.4s up the road in fifth despite a moment on a sandy corner on Salou.

Evans in turn has had the measure of teammate Teemu Suninen across the afternoon loop; the M-Sport duo holding sixth and seventh places heading into Sunday.

Citroen’s six-time champion Sebastien Ogier is looking increasingly likely to lose his world champion status this weekend as he languishes in eighth, needing to either beat Tanak or lose no more than two points to him to remain in title contention.

Following the hydraulic problems that left his C3 WRC with no power steering or paddle-shift gear selector on two of Friday’s gravel stages, Ogier is four minutes adrift of the leaders and used Saturday afternoon as an opportunity to test various set-ups.

Mads Ostberg is ninth and leads WRC2 ahead of Eric Camilli.